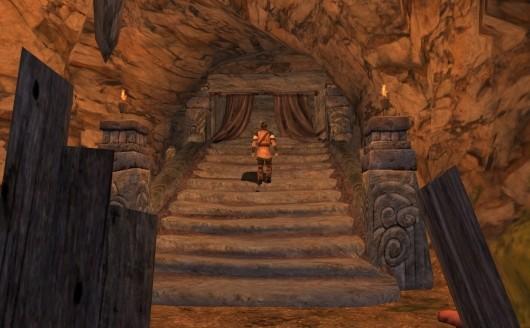 As we talked about last month, Turbine's toting around a double-barreled shotgun full of content that it's preparing to unload. While the biggest blast will undoubtedly be Lord of the Rings Online's third expansion, Rise of Isengard, the team is working hard to provide us with plenty to do between now and then. Part of that effort is directed at Update 3, which is currently scheduled to go live on May 23rd in North America and after June 1st for Europe when the LotRO Global Service takes effect and all of the accounts are moved under Turbine's purview.

I eagerly sat down with Turbine's Aaron Campbell and Joe Barry for a play-through of Update 3's two new three-player instances, Halls of Night and Inn of the Forsaken. Both of these scalable instances will be available to a wide swath of players, and they feature mechanics and sights never before seen in the game.

So join me today as I take you on a brief tour of horrors and adventures beyond imagination. Has everyone used the restroom before we go? Are you sure? It's a long article; I don't want you leaving in the middle of it. OK, let's ride!

If you've ever had a bizarre, terrifying, or unsettling dream from which you can't seem to wake, then Turbine's going to provide you with some nightmare fuel as you head into the Halls of Night. The developers wanted to do something creatively different with this space, so they drew upon the weird dream that Merry and Pippin had during Fellowship of the Ring when they fell asleep in the Barrow-downs.

In this case, you've foolishly taken the bait to investigate a barrow that's been uncovered in Angmar (seriously, is there anything good that comes from that zone? It really should be quarantined by now.). Once you go in and click on a suspicious-looking skeleton, your character falls asleep and your mind is transported into a dream world -- along with your two best friends, of course.

You discover that in addition to inhabiting a new body, you're given a color: red, blue or green. These colors play a huge part in this instance. For example, if you defeat an enemy with the same color as you, you'll receive a nice 30-second damage buff that can be refreshed and stacked if you continue to do the same.

Because of this, team members will find themselves encouraged to get out of their stale combat routines and pay more attention to what they're fighting -- something Turbine hopes will make this instance feel different. The color-vs.-color setup feels natural and is quite easy to pick up. I asked whether Turbine has plans to help out colorblind players and was told that yes, there are buff indicators in place to show the colors of each mob.

Other mobs have interesting roles to play as well. Tombs will continually spawn enemies unless destroyed, Tomb Guards will heal tombs to earn their pay, and Hungry Spirits can even steal your color away for a limited time.

Your narrator for the Halls of Night is Shadow, a friendly spirit who tells you that you've been trapped in a literal capital-N Nightmare. Nightmare doesn't want you to leave, so you're going to have to battle your way out if you ever want to regain control of your bodies -- and minds -- again. In a neat touch, you can even look through a portal to see your slumbering bodies being mocked by a cackling Barrow-wight.

Visually, Halls of Night is refreshingly different from what you might be used to in LotRO. A blood moon hangs in the night sky that surrounds you, and by the time you fight a boss who is in an upside-down version of the Esteldin library, you won't even blink twice at how strange it all is.

The instance is laid out like a T. At the intersection is Nightmare, the final boss, who merely taunts you until you take care of the other two bosses at each wing, Panic and Terror. Terror fights in a room riddled with puddles that can be zapped to induce nasty effects for anyone who passes through. Campbell noted that when you play on Tier 2 difficulty, it's much harder to tell which puddle is dangerous (you'll only see the lightning strike it, but the persistent visual effect that's there on the Tier 1 version will be gone).

The second boss, Panic, will find himself "drawn" to a specific color. If that's your color, then you have the opportunity to do increased damage to him while your teammates defeat adds along the sides of the room. In this way, every member of the team has his or her own heroic moment.

Finally, players will head back to the middle to combat the physical manifestation of Nightmare, who shows himself to be the Stay Puft Marshmallow Man. No, that's a lie. He's not only pretty evil-looking but underhanded as well; Nightmare will steal your color from you, forcing you to run to the side of the room and kill a Tortured Spirit to get it back. I guess you're doing the spirits a favor?

When the dust settles and the final chest is looted, you'll "wake up" back in the barrow with the oddest sensation that your dream felt so very real...

Inn of the Forsaken: Goonies, redux

Did you ever wonder what goes on in Middle-earth's second most famous inn after closing time? Well now you can find out! As its name suggests, Inn of the Forsaken has you investigating the Forsaken Inn in the Lone-lands as the residents have been kept awake by bumps in the night. After poking around a little, you discover a secret passage that leads you to an underground complex. Who knew we were running around on top of a dungeon all these years?

Once you head down into the instance proper, you'll encounter a strange man named Umin. Umin's an upgraded type of NPC in the game; not only will he answer questions and follow you around if asked, but he'll offer up different dialogue options depending on where you are.

Umin's only the tip of the mystery, as he's standing next to a riddle door. Just as the Fellowship had to answer a riddle to get into Moria, so too will you need to answer correctly to pass on through. I was told that there are a whopping 83 riddles, each of which requires a correct emote to solve -- if you give the wrong answer three times in a row, the door switches to a new riddle. The two doors I encountered weren't that difficult, although it might be tricky if you're not used to the laundry list of emotes available for the game. And before you ask, yes, there is a deed for answering all 83 correctly.

Barry said that the Inn of the Forsaken was definitely inspired by Dungeons and Dragons Online's own instances, especially in regard to traps and puzzles. This isn't an instance that you can brute-force your way through; cunning, attention to details, and teamwork are far more important.

Once inside, you'll encounter a classic archaeology dig from the movies -- think Indiana Jones or The Goonies. Traps lurk everywhere, waiting to take a chunk out of your health, and hidden secrets are par for the course.

It's here that your class comes into play. Each class can activate one of three types of clickables. For example, Lore-masters can use lore plaques, Captains can use chain winches, and Champions can bash through damaged walls. Some of these clickies disable traps, while others reveal secrets, and only by working together can players ensure that bigger traps are dismantled and better shortcuts are exposed. Fortunately, if your group doesn't have a class that can handle some of the clickies, you can still progress; this is a purely optional aspect of the instance.

Heading deeper in the Inn of the Forsaken, you'll have to handle rooms of bone piles, which spawn endless waves of skeletons until destroyed -- just like in Gauntlet, the devs laughed. I encountered a statue, usable by my class, which temporarily stunned the skeletons in the room.

Unfortunately, we ran out of time and weren't able to complete the instance, although Campbell was pushing hard to show me a giant waterslide that lay ahead. Guess I'll have to wait until the 23rd! In the meanwhile, let us all enjoy the bounty of 20 new screens from these two instances and sip on the wine of anticipation. When not enjoying second breakfast and a pint of ale, Justin "Syp" Olivetti jaws about hobbits in his Lord of the Rings Online column, The Road to Mordor. You can contact him via email at justin@massively.com or through his gaming blog, Bio Break.
In this article: aaron-campbell, angmar, barrow, barrow-downs, ddo, dream, dreams, dreamscape, dungeons-and-dragons-online, emotes, europe, featured, forsaken-inn, gauntlet, global-service, goonies, halls-of-night, hungry-spirits, indiana-jones, inn-of-the-forsaken, joe-barry, lord-of-the-rings-online, lotro, lotro-global-service, may-update, merry, nightmare, no-time-for-love-dr-jones, panic, pippin, riddle-door, rise-of-isengard, terror, the-goonies, tomb-guides, tortured-souls, turbine, turbine-entertainment, umin, update-3, waterslide
All products recommended by Engadget are selected by our editorial team, independent of our parent company. Some of our stories include affiliate links. If you buy something through one of these links, we may earn an affiliate commission.
Share
Tweet
Share