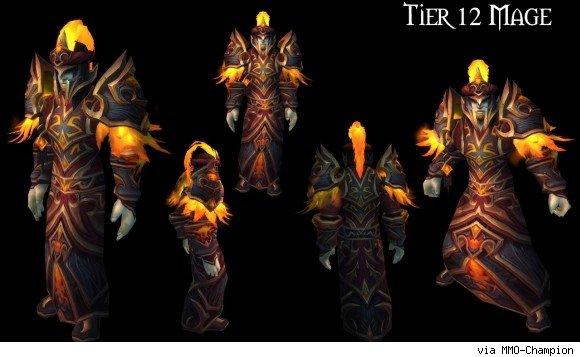 Every week, WoW Insider brings you Arcane Brilliance for arcane, fire and frost mages. This week, we'll be discussing the Firelands patch and the sweet new mage gear it will be providing to us. Also, what is that thing sticking out of our helmets? Is that a tail? Made of fire? A flaming headtail of magical might?

So we're only a few weeks into patch 4.1, and already our sights are focused squarely on patch 4.2. You can hardly blame us, though. I mean, while I am thoroughly enjoying the current patch, what with its freshly recycled 5-man content and its new Dungeon Finder Call to Arms that I don't seem to benefit from in the slightest (my queue times are right back up to 30 minutes, thanks), but I think we can all agree that for a major content patch, 4.1 was substantially light on ... well, content.

Not so with 4.2. Patch 4.2 will be bringing us the Firelands, which is apparently a raid where epic cupcakes fall from the sky like rain, hardcore raiders experience orgasms just by zoning in, and we all ride flaming unicorns across lava bridges to do battle with volcanic dragon manticores. I'm not kidding. The entire raid sounds like something you'd see painted across the side of a rock band tour van in the '70s. We're also getting two new daily quest areas with their own epic loot vendors, and yes, the game's first legendary staff. And no, it doesn't have spirit on it.

New raid content means new tier sets, and this time around, we're reaching a cool dozen. The tier 12 set bonuses are interesting, to say the least, and bear a bit of looking at. Keep in mind, though, as we discuss these bonuses that we're still early in the PTR process, and everything on the test realms right now is entirely subject to change -- which is, in this case, a very good thing.

The two-piece set bonus is what it is, and what it is ... is unimpressive.

What it sounds like Okay. So whenever you use your major nuke, you'll have a chance of getting a little extra companionship. Your new friend will be a braindead, largely inoffensive and mostly harmless copy of yourself. He will target what you were targeting when he appeared, do very little damage, and the most you should expect from him is that he doesn't accidentally wipe the raid.

Mirror Image has been a fairly disappointing spell throughout its existence. I mainly use it as a threat control device in PvE, because the damage it adds is marginal to begin with and doesn't scale. The idea of adding another copy that does an even tinier amount of extra damage over a limited period of time is somewhat less than thrilling. Essentially, this bonus sounds like a very, very small damage increase and not much more.

How it could be cool But now's the point where the cogs in my brain start moving, and I start envisioning the potential hidden in what sounds like a very boring set bonus.

So every time I cast my nuke I have a chance to summon a Mirror Image? Is there an internal cooldown on that? By which I mean: Can I have more than one of these jokers assisting me at once? Is there potential for a stacking cadre of stupid copies of myself, assuming a long enough fight and a consistent enough string of casts?

Also: How does this Mirror Image affect threat generation? If having a copy around lowers my threat generation, that raises my enthusiasm for this bonus by pretty much a billion. If my copy takes on some of my threat or potentially confuses an add into attacking the image instead of me, or any number of other possibilities, I'm all for it.

So here's what I'm envisioning.

I'm casting away, nuking the crap out of Ragnaros or Ragnaros' illegitimate uncle or whoever. The proc rate on this is pretty high, meaning I pretty much always have at least two copies of myself out at all times, casting brainlessly at whatever shiny object happens to cross their path, adding at least some extra DPS, and most importantly, reducing my threat generation and taking the occasional bullet that was meant for me. Then Mirror Image comes off cooldown and suddenly I've got seven or eight copies of me running around, humping Ragnaros' leg, taking my wife out on dates, mowing my lawn, and babysitting my kids. Good times.

And as I've always said, more mages is never a bad thing.

The four-piece bonus, on the other hand, is boring for fire mages and frost mages. For arcane mages, though, it's awesome.
What it sounds like So for non-arcane mages, you're getting more frequent free, instant Pyroblasts or Fireball/Frostfire Bolts. This is good, clean, boring fun. It translates into better mobility, more damage, and more frequent visits by the proc fairy. She comes in the night to good little mages and leaves Pyroblasts under their pillows. She also comes to warlocks in the night and leaves them Pyroblasts, only she leaves them right in their faces. I love the proc fairy.

Now, is the extra damage provided by these more frequent procs going to provide enough extra DPS to be worthy of a four-piece set bonus? That will depend on the actual proc chance, really. And that's something the developers can easily tweak throughout the testing process and even after if damage seems too low. It's a solid, but unexciting bonus.

But for arcane mages ...

Increased procs on Arcane Missiles is fine, but doesn't compare to the extra Brain Freeze/Hot Streak procs for the other two specs, because Arcane Missiles is a very tiny fraction of our overall DPS. We only use it now because we have to to conserve mana.

But add in the last part of that note -- the part about Arcane Missiles being castable while moving -- and you get a potential game-changer. In fact, it's such a significant buff and altered mechanic, it almost seems too big for a tier set bonus, if that makes sense. We'll talk more about that in a minute.

Anyway, arcane mages who manage to obtain four pieces of tier 12 gear will get the ability to cast Arcane Missiles on the move. This all but solves the main issue still facing the spec: mobility.

When moving, arcane mages previously only had two spec-specific damage options: Arcane Barrage every 4 seconds and a single Presence of Mind-assisted Arcane Blast, if it happened to be off cooldown and you felt like blowing it on that one Arcane Blast. With the four-piece bonus, we now have an actual movement rotation: Arcane Barrage whenever it's off cooldown, and Arcane Missiles in between whenever it has procced, which should now be more frequent.

It's a massive change, really, and one I've specifically asked for several times, even once in this very column. My only problem with it?

This is something that should really be baseline. Arcane mages need a mobility option, and this is that option. It's a damn shame that only those who've reached the current pinnacle of endgame raiding will be able to benefit from it. It won't cause our DPS numbers to skyrocket, but the impact it will have on mechanics and playstyle will be huge. The change is, quite frankly, too significant -- too needed -- to be withheld from such a potentially large segment of the mage community. And way too huge to simply replace once another tier of gear comes out.

How it could be cool(er) Simple: Make the bonus for arcane mages something else. I vote for something in line with the bonuses for frost and fire. Give spellcasts a chance to trigger an extra, off-cooldown proc of Presence of Mind. This will give us the occasional instant nuke, in the same vein as Pyroblast and Fireball/Frostfire Bolt, and will be a DPS increase in roughly the same amount, assuming the proc rate is tweaked properly. The set bonus would be equally effective and boring for all three specs.

And then, make the moving Arcane Missiles change baseline. As currently designed, Arcane Missiles isn't anywhere near being overpowered damage-wise. It'll simply morph from a spell that we only use to control mana consumption into a spell that we also use for movement phases. Yes, the spell will get more play in PvP, but honestly, every mage tree besides frost could stand to see more play in PvP.

Oh, and about Spellsteal

This nerf is sort of necessary, we understand that. Spellsteal spam was becoming a problem in PvP. But adding a 6-second cooldown to the spell in the coming patch is a poor solution to the problem. Spellsteal is a defining mage ability, and we hate seeing it mucked with in any way, but we understand that it can be abused. But don't add a cooldown.

Instead, I'd prefer raising the mana cost to make spamming it a cost-benefit decision for mages. Leave the decision to spam it in the hands of the mages themselves, instead of simply removing the option. If we want to waste all of our mana pools so we can chew through all 15 of that pally's buffs so we can have his pretty wings for like 3 seconds, let us.

What other ideas do you all have for solving the Spellsteal dilemma without gimping one of our signature abilities? And what do you think of the new tier bonuses? Also, if any of my readers are fabulously wealthy, could you consider paying me enough money that I could quit my day job and stop having to miss weeks of this column to the demands that job places on my time? I look forward to hearing from you, filthy rich mages. (Sorry about last week, guys.)

Every week, Arcane Brilliance teleports you inside the wonderful world of mages and then hurls a Fireball in your face. Start off with our Cataclysm 101 guide for new mages, then find out which spec is best for raiding, get advice from the poor mage's guide to enchants, and learn how to keep yourself alive.