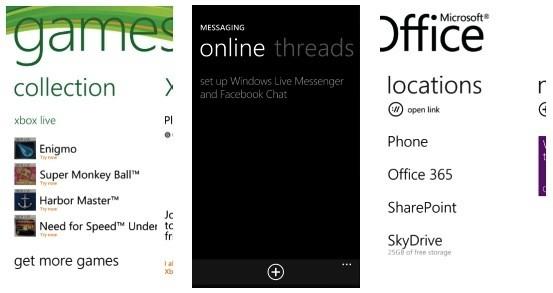 The Windows Phone Dev Podcast unearthed some seemingly legit Windows Phone 7 screenshots last week that revealed a few new features apparently headed to the mobile OS, and it's now back with another batch that show yet more additions said to be included with the so-called "Mango" update. That includes support for Facebook Chat and Office 365 (plus SkyDrive and SharePoint), as well as a revamped Games hub that suggests even more Xbox Live integration (including a rather interesting new "Automatic Sync" option). What's more, the lock screen will apparently now show the album art if there is a song currently playing, and it seems there will be some new group messaging options as well. Of course, all that's still unconfirmed by Microsoft, but you can judge all the screenshots for yourself at the link below.

[Thanks to everyone who sent this in]
In this article: facebook chat, FacebookChat, mango, microsoft, office 365, Office365, update, windows phone, windows phone 7, WindowsPhone, WindowsPhone7, xbox, xbox live, XboxLive
All products recommended by Engadget are selected by our editorial team, independent of our parent company. Some of our stories include affiliate links. If you buy something through one of these links, we may earn an affiliate commission.
Share
Tweet
Share