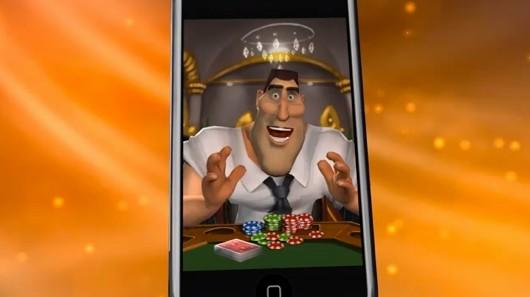 Being a giant, beloved video game site has its downsides. For example, we sometimes neglect to give independent developers our coverage love (or loverage, if you will) as we get caught up in AAA, AAAA or the rare quintuple-A titles. To remedy that, we're giving indies the chance to create their own loverage and sell you, the fans, on their studios and products. This week we talk with animator Dustin Adair, founder of Scary Robot Productions about his maiden game: Poker With Bob.
How did you or your company get started?
I am a character animator for film and television and I've been working in Los Angeles for over a decade now. I've worked on a wide range of projects but when a friend of mine was once viewing my demo reel he commented that I had animated a lot of "scary robots" (Cylons and Terminators, for example). It was then that I decided to name my company after that fact and Scary Robot Productions was born. Poker With Bob is my company's inaugural creation.


Why did you want to make games?
I've always been an avid gamer but I hadn't planned to make video games. Unfortunately, after watching my industry evolve in frightening ways over the last decade, I thought it was a good idea to spend my free time working on a "Plan B," just in case. And for me that was game development. There's a lot of elements that I can bring from my experience in visual effects which translate well into the development of games

Why be independent rather than try to work for someone else?
Freedom. Freedom to experiment and create whatever you can think of. Triple A titles (which I love to play) have pushed the cost and production values of console games so far that indie developers are all but shut out of the console market. Even the downloadable console market has become a challenge to get into. But the mobile market is a throwback to a time when a small or even one-man crew can create an amazing product. And it gives developers the opportunity to take more risks in terms of looks, themes and gameplay. It's exciting being able to create whatever you want without the fear of having the project revamped, revised and focus-grouped by a herd of people who may never have even played a video game in their life!

What's your game called, and what's it about?
My game is called Poker With Bob and it's a draw poker game for the iOS market. What makes it unique is that Bob is a wise cracking, trash talking, real-time, 3D animated character that you face off against in a one-on-one draw poker match. By having Bob staring out at you and narrating the gameplay I feel it adds a level of gameplay immersion that can't be found in any of the cold, faceless top-down styled poker games that litter the app store. It's extremely gratifying seeing Bob freak out when he looses a big pot. Trust me, you can't help but smile.

Do you feel like you're making the game you always wanted to play?
I'm very proud of Poker With Bob and I still enjoy playing it all the time. But it's not my ultimate dream game. In fairness, this is my first completed game so I feel it's a strong first effort and I hope it will be a stepping stone onto what would some day lead to the chance to make my "ultimate" game.

How long did it take you to create?
Because my work time was limited to, at most, a couple of hours a night and some weekends the game was ultimately a two year labor of love.

What are you proudest of about your game?
I'm most proud of the fact that Bob truly feels like a personality. Nothing cracks me up more than people reading into the game certain aspects that they swear are there ... even if they're not. Because Bob is such a strong presence people end up attributing more traits and features to him than I ever could have given him.

What one thing would you tell someone to convince them to get your game?
Poker With Bob is accessible to all! People who have never played a hand of poker before in their lives have gone through the in-game tutorial, started playing and before they knew it they were completely hooked. Try out the free version and see if Bob doesn't hook you in for just "one more hand."

What's next?
There's been great feedback from the community on what they feel would make the game better. I'm currently working to add those items into a free upgrade. They include: dozens of new animations and audio segments to make sure Bob never feels repetitive, a $50 bet button so you'll be able to have some truly massive sized pots, and a "quick play" feature that cuts down on Bob's narration of your actions which helps to quicken the pace of the gameplay but still retain the snarky, humorous animations that help to set the game apart from all of the others.
Want to see how you stack up against Bob? Get his game right here.

If you'd like to have your own shot at converting our readers into fans, email justin aat joystiq dawt com, subject line "The Joystiq Indie Pitch." Still haven't had enough? Check out the Pitch archives.
In this article: ios, iphone, joystiq-indie-pitch, mobile, poker, poker-with-bob, scary-robot-productions
All products recommended by Engadget are selected by our editorial team, independent of our parent company. Some of our stories include affiliate links. If you buy something through one of these links, we may earn an affiliate commission.
Share
Tweet
Share