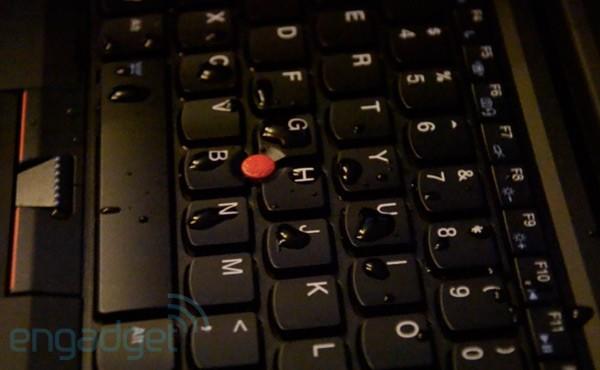 The ThinkPad X1 thought it was safe. It foolishly believed that, having reviewed it in full, we would spare it from further scrutiny at Lenovo's UK launch event this evening. We quite naturally did no such thing, poking and prodding at the slimline laptop -- which still feels supremely well built -- but we also went that one step further, by putting it through a trial we didn't dare subject our review unit to: a spill test. Well, it was a less a spill and more of a steady stream of water that we doused the X1 in, which might explain why it eventually gave out and shut down on us. Lenovo says that the keyboard tray can only handle 25cl of water before throwing a self-protect switch and turning the computer off. Given enough time to fully dry out, our unfortunate test subject might even have been brought back to life, but our efforts at restoring it were met with failure. You can see the H2O-based carnage after the break, though we should note that Lenovo managed to perform this test three times without taking the X1 out of commission... before we came along and ruined its spotless record.

In this article: 13-inch, 13.3-inch, hands-on, keyboard, lenovo, spill, spill-proof, spill-resistant, splash, splash-proof, test, thinkpad, thinkpad x1, ThinkpadX1, video, water, windows 7, Windows7, x1
All products recommended by Engadget are selected by our editorial team, independent of our parent company. Some of our stories include affiliate links. If you buy something through one of these links, we may earn an affiliate commission.
Share
Tweet
Share