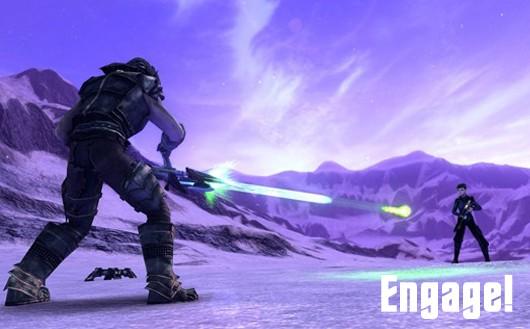 Hello, computer (and players)! Guess what's back? That's right! Hailing frequencies are now reopened -- Captain's Log is no longer on hiatus. Over the past few weeks, there has been some great news released about the Star Trek Online universe: the winner of the Design the Next Enterprise Contest was announced, the May Ask Cryptic was released, the dev team revealed the 500-day veteran rewards, and the Featured Episode reruns began. While everyone has had his or her own opinions on these stories, there is one piece of news that everyone can agree on: the awesomesauceness of the latest Engineering Report.

As first announced earlier this week, Executive Producer Dan Stahl dropped his latest report, which describes the updates to the game coming in Season Four. As usual, aside from the imminent new content, Dan foreshadows the future for us. Captain's Log is no stranger to talking about the future of the game, so I am excited to share some more details about the upcoming updates with you. Since Season Four is right around the corner and I believe it will be the "game changing update this game has needed since launch," let's get on to this week's Log entry.

As you all know by now, I honestly feel that STO is one of the best MMOs out there. The ability to play in both space and ground combat, coupled with one of the world's most famous IPs, makes it truly a force to be reckoned with. However, I do share the same sentiment as most of you out there that the space portion of the game is more entertaining than the ground portion, which has always felt unpolished. Season Four is going to bring us an update to the ground portion of the game that will hopefully bring it to the level of its counterpart. So let's talk about what this entails as well as some other awesome things coming to a transporter room near you.

While the official title of Season Four has not been announced, it might as well be "The Ground Combat Overhaul" -- everything we know about ground combat is changing. Almost every ground weapon and personal kit will be getting a "rework and rebalance" pass, Dan told us. Some of these changes are going to affect the rate at which weapons fire, their ranges, how they look, and DPS adjustments based on weapon type and other circumstances. A new camera mode is also being added; it will allow you to go into an "over the shoulder reticle mode."

In an unscheduled Ask Cryptic, Associate Producer Salami_Inferno recently answered some questions about the changes, telling us that the new mode will allow you to click to shoot your weapons, including secondary and tertiary powers, using a mouse. You will also be able to drag your camera to shoot at enemies, allowing a tank to better grab agro. Salami also mentions that this is going to be great for the healers on your team as they too will be able to simply hover over you and click a heal power. I already know this will come in handy in many of the STFs.

A new element of gameplay that is being introduced for STO is the duty officer system. Players will be able to "slot" officers, who can be obtained through a variety of means and who will each play various roles -- eventually, you will also be able to choose your department heads from those of the lower decks. While you will not be seeing these characters walking around your ship interiors, at least not at this point, you will be able to send them on away missions that can end in reward or disaster. You may even assign them to a certain task on your ship, which can give a slight increase to a particular stat.

While many have said that the new system seems like a trading card game, the devs have rebutted that by arguing that it is much more that that. Still, it kind of looks like each officer will be the equivalent of a trading card. Each of them will come with his or her own, non-changeable name and rarity status. There has also been mention that some civilian-type characters will be thrown in the mix. I really hope I can get my own Neelix to cook in fresh eats in Ten Forward. Make sure to subscribe to this forum thread so you can keep up-to-date with all the news about this new gameplay mode.

Along with the ground changes and the duty officer system, plan to finally see the completion of the integration of the Vivox voice chat system, which will allow players to instantly communicate with other players connected with a gaming headset. We will also be seeing a giant update for the Klingons; they will be getting a new starting zone and some leveling tweaks that will make playing them even less grindy. Coinciding with this, the requirement of needing a Federation toon at level 6 to start a KDF toon will be dropped. This is great news, and I would expect to see a large increase in the percentage of accounts that have at least one KDF toon rolled.

We can also expect to see more costume options before Season Four is launched, including one thing that players have been wanting for months: the ability to use any combadge with any uniform. I am also looking forward to the new material options for costumes that will allow for further customization. And you players out there who love your female toons should get ready for some new skirt and boot options!

A major feature that is in development (aka "actively being worked on by the development team") is the PvE queue system. This will allow players to gather up to 20 friends to launch a Fleet Action or a group of five for a STF. Next in development are the new Starfleet and Klingon Academy areas, which will house the future tutorials and will finally create a place to beam down to on Earth. We can also expect to visit the other planets in the Sol system, a variety of new ships, more changes and updates to missions, and many more features in the hopefully not-so-distant future.

Well, Captains, we have come to the end of this week's log entry. Before we go, I wanted to touch on another topic quickly -- the announcement that Cryptic is "being dropped" by Atari. I created a post in the STO forums about the news that got quite a bit of attention, including that of the devs. Community Rep Wishstone commented that Gamasutra's chosen headline was an "unfortunate" one that "makes it sound like we're a kicked puppy standing in the rain [when t]hat's not the case." Stalhl even chimed in, saying that "STO is full steam ahead" and that the game is business as usual at this point. Massively will be sure to post any updates to the situation that arise. Until next time, start thinking about what duty officer is going to be your "poop-deck floor scrubber," if you get my drift.