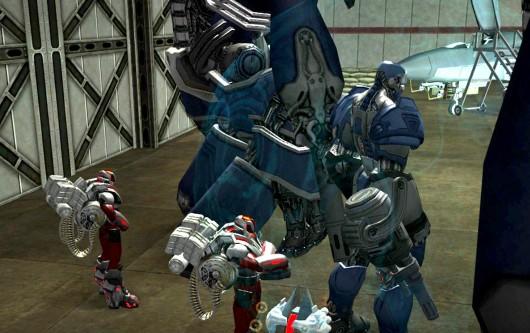 There's been so much going on with City of Heroes over the past few months -- we've seen a new spin on older content and the anniversary and the new endgame system engaging the game's players in new content. It's a lot to take in all at once, and it's easier to process when you have the chance to talk it over with some of the development staff.

During a special NCsoft event, our own Bree Royce had just such a chance to get some questions answered directly by the development team about Issue 20, the Incarnate system, and the state of the game both at present and going forward. Matt Miller and Nate Birkholz shared reflections on what has worked and what has gone a bit awry in the development, something that should be of interest to every City of Heroes player. Sadly, the discussion does not include any zombie catgirls -- just the parts that worked and the parts that wound up being problems.

And there have been problems, certainly. In fact, the biggest problem that came up at the launch of Issue 20 was that the issue introduced two brand-new task forces that were virtually ignored in favor of the massive expansions to the endgame content. But it's a mistake born in part out of necessity, as Issue 19 had the reverse problem. By giving players just one slot of passive buffs to work on, the devs drove players right back to lower-level content as soon as their Alpha Slots were filled, rather than encouraging them to focus on the endgame.

On what will the team be focusing in the future? Everything. The endgame has been an area long missing from CoH, but there's no lack of understanding about how popular creating new characters really is. The reason a great deal of focus has landed on the endgame recently is that the devs wanted to build a foundation, but they remain stalwart about introducing new content to players at all levels throughout the game. Incarnate trials are a perfect example of this attempt to build up a solid foundation; the plan is to try to release a new trial with each patch, with a few extra trials coming simply to fill in the gaps initially.

The same is true of the Incarnate system as a whole, with the initial 10 slots being built up as a foundation for players to grow accustomed to. Once the 10 slots are in place, each given slot can be expanded to more options, and more slots can be added further down the line. The important part is getting the core down and working first.

But the game is never going to stop centering around alts and giving players the freedom to play with alts as desired. On that note, the team is looking at the leveling speed between 30 and 50, the point at which leveling slows down and many players start abandoning their characters. Obviously, there's a caution about making a level 50 character trivial; at the same time, the game is no fun if the endgame requires a miserable amount of grinding to reach. It's a matter that the team is still keeping a close eye on and will be adjusting as necessary.

Issue 21 has only been briefly discussed, but it's confirmed that it will not include any more Incarnate slots for players, just so that it's easier to keep pace with the large number already available. Weekly Strike Targets, meanwhile, are due for a bit of boost in rewards -- the Incarnate trials are currently stealing the limelight, but the team definitely wants the weekly targets to be hit, well, at least once per week.

Players getting a little sick of the Praetorian invasion can rest assured that it will be coming to an end at some point in the future, although there's no word on exactly when. (The joking response was that it would be finished in about seven years.) Telling an ongoing story is a hard prospect in an MMO where there's no desire to remove content, but while the content will remain in-game for future characters, as time passes the core Praetorian invasion will play out and come to its conclusion.

We also asked about the Mission Architect system, which is always a bouncy element of design, one that hasn't gotten a great deal of attention in recent updates. Miller explained that since the game's wide variety of content was designed expressly to give the player optimal rewards, he was fine with the idea that the architect missions were largely for player expression rather than providing a means for leveling. Some of the "content-on-demand" niche has already been filled by the Team-Up Teleporter, which he goes on to mention was the biggest element holding Issue 20 from release simply because the team kept wanting to add new functionality to it for grouping.

At the same time, however, the Mission Architect system is an important element within CoH, and the devs want to continue supporting it. They're just not interested in supporting it as a tool for farming. The slightly lesser rewards are balanced out by the fact that players get to experience someone else's story.

It's always a pleasure to hear from the staff behind CoH, and as always we'd like to thank the staff members for their time and patience in answering our questions. There's a great deal of life in the game still, and it looks as if the team has a clear vision for how to keep the updates rolling along for another seven years of life.

In this article: city-of-heroes, city-of-villains, coh, cov, cox, endgame, featured, future-patches, incarnate-system, incarnate-trials, incarnates, interview, issue-19, issue-20, issue-21, mission-architect, ncsoft, paragon, paragon-studios, patches, praetoria, praetorian, praetorian-invasion, weekly-strike-target
All products recommended by Engadget are selected by our editorial team, independent of our parent company. Some of our stories include affiliate links. If you buy something through one of these links, we may earn an affiliate commission.
Share
Tweet
Share