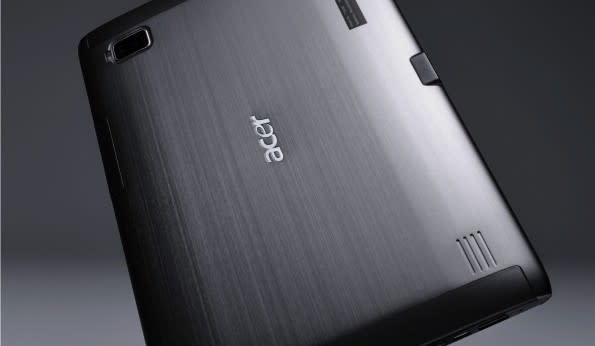 Paul Otellini already told us that we'd see new Android tablets running Intel silicon at Computex. Now DigiTimes is quoting loose-lipped upstream component makers who claim that Acer is set to launch its 10-inch Android 3.0 tablet built upon Intel's Oak Trail platform in July. Mind you that's the retail date, making the May 31st kickoff of Computex the perfect event to demonstrate the unARMed Android tablet for the first time in public. Of course, Acer was early with its Android-based netbook back in 2009 so it's no surprise to see the company with another Google first in 2011. And really, without a suitable Microsoft tablet OS available until 2012, you can bet that Intel's going to be pushing the Honeycomb port to x86 hard over the coming months with rigs from Lenovo and ASUS also tipped by DigiTimes. Oh, and for whatever it's worth, the Taiwanese rumor rag also says that Acer is "evaluating" an Oak Trail with MeeGo tablet. Which version, we wonder?
In this article: acer, android, android 3.0, Android3.0, asus, computex, computex 2011, Computex2011, digitimes, honeycomb, intel, intel android, intel tablet, IntelAndroid, IntelTablet, meego, meego tablet, MeegoTablet, oak trail, OakTrail, rumor, tablet, z670
All products recommended by Engadget are selected by our editorial team, independent of our parent company. Some of our stories include affiliate links. If you buy something through one of these links, we may earn an affiliate commission.
Share
Tweet
Share