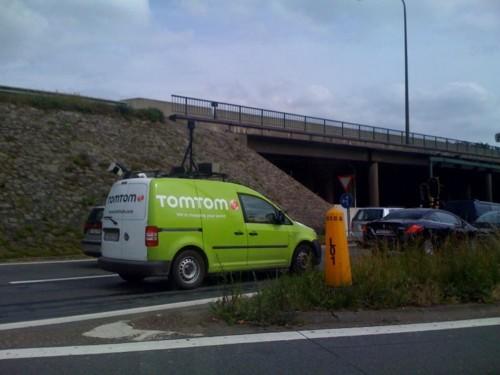 TomTom's already seen Google muscle in on its turf in a big way, and it looks like it might now be trying to return the favor. If camera-toting vans like the one above are any indication, it would appear that the company is currently working to bolster its navigation options with its own Street View-like service. So far, all of the van sightings seem to be confined to Europe (France and Belgium, specifically), and they of course don't necessarily confirm that TomTom is indeed working on a Street View competitor -- although we have to wonder what the vans are for if it's not. It's also worth noting that TomTom did acquire TeleAtlas, which uses vans equipped with cameras, lasers and GPS in the actual creation of its maps, but the higher, 360-degree camera used on these vans seems much closer to those used on Google's Street View cars. Seen one yourself? Feel free to let us know in the comments below.
In this article: gps, map, mapping, maps, navigation, street, street view, streets, StreetView, tomtom, van, vans
All products recommended by Engadget are selected by our editorial team, independent of our parent company. Some of our stories include affiliate links. If you buy something through one of these links, we may earn an affiliate commission.
Share
Tweet
Share