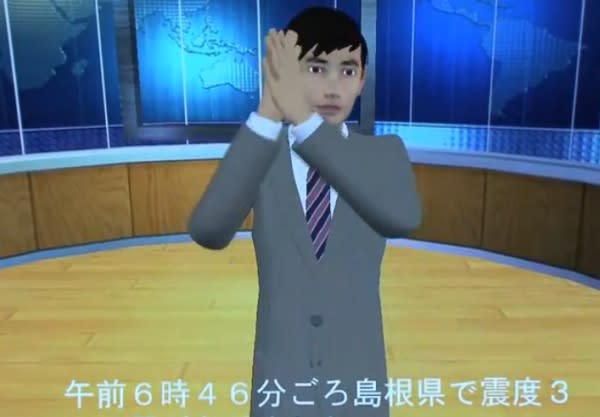 We've seen quite a few devices designed to help hearing impaired users communicate via phone or computer, but Japan's NHK Science & Technology Research Laboratories has just announced a new animated translation system to help get important news to deaf viewers . While televised subtitles may work for those who understand the language, people who were born deaf and learned sign language from an early age can have significantly more difficulty. NHK's system, unveiled at Technology Open House 2011, bypasses this problem by automatically comparing Japanese text to sign language, converting equivalent words into animated onscreen gestures, and replacing differing words with appropriate synonyms. There are, however, a few kinks to work out. While comprehensible, the translations aren't exactly fluent and researchers have been forced to manually adjust some awkward transitions between words. The ultimate goal is to create a system that could be used during emergencies or natural disasters, allowing deaf citizens to receive urgent broadcasts as instantly as their hearing compatriots. You can see it in action, after the break.

In this article: automatic translation, AutomaticTranslation, broadcast, deaf, emergency, hard of hearing, HardOfHearing, hearing, hearing impaired, HearingImpaired, japan, language, natural disasters, NaturalDisasters, news, nhk, NHK Science and technology research laboratories, NhkScienceAndTechnologyResearchLaboratories, prototype, sign language, SignLanguage, technology open house 2011, TechnologyOpenHouse2011, text, translation, video
All products recommended by Engadget are selected by our editorial team, independent of our parent company. Some of our stories include affiliate links. If you buy something through one of these links, we may earn an affiliate commission.
Share
Tweet
Share