T. Stevens
June 5th, 2011
In this article: android, android 2.2, android 2.2.2, Android2.2, Android2.2.2, bluetooth, blur, droid, droid x, droid x2, DroidX, DroidX2, motorola, review, smartphone, verizon, verizon wireless, VerizonWireless, video
Would a Droid X by any other name smell as sweet? When we reviewed that phone last year we found it to be a solid performer in a solid chassis. In short: a very good phone. Now it's back with a new name, or a revised one at least, the Motorola Droid X2 offering the same basic design as its predecessor but packing a lot more heat on the inside -- a dual-core dose of Tegra 2, to be specific. Will it tickle your olfactory sensors just like the first X?
%Gallery-125196%
Motorola
0
SCORE
Engadget
N/A
Critics
5 reviews
76
Users
10 reviews
65 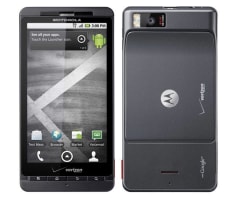 Out of the box there's not a lot to differentiate the X2 from its postscript-free predecessor. In fact, little has changed from a design standpoint, so we won't be delving quite as deep here as we did with the first X. There's much the same sleek, slim design that's thin for most of the chassis, fattening up at the top to make room for what appears to be the same 8 megapixel sensor with dual-LED flash. This protrusion makes the whole thing a bit top-heavy and a stubborn occupant of your skinny jeans if you try to shove it in head-first, but that bit of extra junk is the only bit of flab on what is otherwise a trim handset.

At its thickest, the top, it's 9.99mm (0.39-inches). Its 65.5mm width and 127.5mm height (5- x 2.5-inches) make room for a big, bright 4.3-inch LCD up front that's moved up to qHD since the X -- an impressive 960 x 540 resolution. Viewing angles are extremely good as is contrast, making this one of the best displays we've yet seen on a handset. It doesn't quite have that look of the Super AMOLED Plus displays Samsung has been packing on phones like the Galaxy S II or the Infuse 4G, but its brightness, contrast, color reproduction, and most importantly resolution make it a very strong contender.

Situated beneath the bottom bezel are the same four physical buttons found on the original Droid X -- a nice touch but still a bit skinny and still a bit hard to press without really giving 'em a good squeeze. As on the original X that's not necessarily a bad thing, but it's certainly an unfamiliar feel if you're used to accidentally dropping to your home screen with a wayward stroke from your thumb.

On the bottom of the left side a micro-USB and micro-HDMI port are nestled, the latter curiously situated a few fractions of a millimeter lower than the former. Details. Unfortunately a swapped orientation on these takes any hopes of compatibility with the Atrix dock and throws it out the window. Up top the 3.5mm headphone jack is offset to the left, and a shiny lock / power button is situated in the middle. The right side has only a chrome volume rocker while the bottom has, well, nothing -- just the slightest hint of a chin.

Like before, the battery cover is firmly held in place by an asymmetrical series of clasps that fit into an asymmetrical series of grooves. The 1,500mAh battery requires a good tug to extract from its cubby, showing the tight tolerances at play here. An 8GB microSD can then be slipped out, and if that seems a bit paltry in these days of the 32GB chips offered in phones like the Charge, well, it is. But, an additional 4GB of user-accessible storage lies within the phone, meaning you really have 12GB here to play with. Plus, there's roughly another 1.5GB in there for apps and such.

One thing you won't find under the back cover is a slot for a SIM card. That is, of course, because this is a strictly 3G phone in an increasingly LTE world.

The 2 in X2 of course stands for the second processor core that's been tucked away inside here, Tegra 2 running at 1GHz. As a pair those cores deliver solid performance, starting with a quick boot and extending all the way through every task you can throw at it in today's Android ecosystem. It's definitely a powerhouse, evidenced by its benchmark scores. Neocore delivered 54.6, Linpack 36.229 MFLOPS, Quadrant 2,509, and SunSpider completed in just a hair over 4,000ms. Impressive numbers.

Despite that performance the phone offers respectable battery life. It's not great, not matching the Droid Charge or the Infuse (which, admittedly, are packing bigger cells), but the lack of LTE here means this phone should get you through a full day of typical usage. We made it through one earthly revolution and well into a second of casual e-mail and surfing usage before running for an AC outlet, but if boot up Google Nav and get some Google Music streaming in the background and you'll quickly be reaching for that car charger, as with every Android handset.

GPS performance, however, is quite good. The phone locked on to our location in seconds and refused to let it go, and kept a solid wireless connection whenever such a connection was available. Oh, and how is it as a phone? Again quite good. The earpiece speaker is loud and clear, as is the speakerphone built into the back.

We're not seeing any major differences in the camera hardware here since the original Droid X, so much of what we saw before still applies here. Images are a bit under-exposed at times but overall quality is quite good, and the triple-mic setup delivers great audio for video shooting. Curiously, though, recording still tops out at 720p despite the considerably improved pixel-pushing hardware on offer, and Motorola sadly chose to do away with the two-stage dedicated camera button. A shame for shutter bugs.
%Gallery-124509%

The Droid X2 ships with Android 2.2.2 installed, but it has of course been customized by Motorola. Frankly, though, we found most customizations to be good ones. There's no heavy Blur applied to the experience, and you won't have to log in separately as in previous Moto phones. The Swype keyboard is pre-installed, but the customized multi-touch keyboard is still quite good, offering reliable predictions of what you meant to type and what your next word might be as well.

Text selection is made easy with an iOS-style popup magnifying glass, while Moto provides plenty of attractive widgets for getting the forecast, enabling the phone's various radios, and controlling media playback.

There are of course a suite of applications pre-installed that you'll have whether you want them or not. Many apps are mostly unwanted, like the ubiquitous Lets Golf 2. Some apps will be wanted by some, like NFL Mobile and Best Buy, and some are actually quite useful, like Quickoffice and Verizon's Backup Assistant. Thankfully it's not quite the onslaught of crapware we've seen with devices like the Charge or more recently the Incredible 2, and we had no problem uninstalling most of them. That said, if you're feeling noncommittal you can use the customized applications list to create a group of the apps you actually use and set the phone to display only those, hiding the whole big mess. Out of sight, out of mind, right?

The $200 Droid X2 is definitely a worthy successor to the Droid X name. The design still cuts a striking profile and of course the new dual-core processor won't leave you wanting. However, the lack of LTE connectivity just might. Sure, Verizon hasn't exactly managed to get us locked in coast-to-coast with its flavor of 4G, but enough places are already online to make LTE compatibility a desirable feature. That the X2 doesn't have it has to be seen as a shortcoming.

Still, with the X2 you're getting a slim phone with good battery life and extremely good build quality. For now, it's the best Android handset on Verizon for those who aren't quite ready to commit to the fourth G.

Myriam Joire contributed to this review.