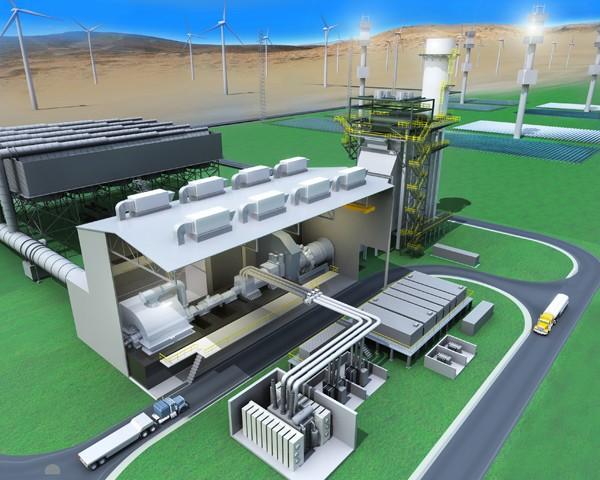 GE's legacy dates back over a century, but, despite its old age, the company's got a fresh outlook on the future of energy production (at least according to its PR department). Earlier this week, the outfit announced MetCap Energy Investments' plans to build a "first-of-its-kind" hybrid power plant, tapping GE's FlexEfficiency technology, which combines natural gas, wind, and solar thermal power. The plant, planned for completion in Turkey in 2015, will produce enough energy, according to GE, to power 600,000 homes, and could lead to plant efficiency greater than 70 percent. What's more, the company promises zero liquid discharge and single-button 28-minute startup. Here's hoping this cracks up to be a better fit than NBC. Full PR after the break.

By designing the plant from a total equipment and control systems perspective and utilizing the flexibility of GE's FlexEfficiency technology, engineers were able to seamlessly integrate natural gas, wind and solar thermal power. The FlexEfficiency 50 IRCC plant is designed for flexible operation by integrating a next-generation 50 Hz 9FB Gas Turbine, a steam turbine, a generator, 22 MW of GE wind turbines and 50 MW of eSolar concentrated solar thermal tower technology, all integrated by a GE Mark* VIe plant control system.

"When we recently announced our breakthrough FlexEfficiency technology, we talked about being able to better integrate renewables with natural gas to produce cleaner, more affordable and reliable power. This project combines two renewable technologies and natural gas in the same power plant and demonstrates the benefits it can offer to power the future grid. Integrated renewable combined cycle power represents a significant growth opportunity for GE Energy. At MetCap's site conditions, we will achieve 69 percent plant efficiency, and this technology provides the capability to deliver efficiency greater than 70 percent at Gas Turbine World conditions," said Paul Browning, president and CEO-thermal products for GE Energy.

"MetCap Energy is on the leading edge of power development and, with this project, they have set a new global standard for the efficient integration of natural gas and renewable energy. This is the first example of how our recent investment in eSolar will enable future growth opportunities for GE Energy, and we already are seeing a growing interest in the industry for this technology. It is another big step forward for GE's ecomagination initiative and is in lock-step with our commitment to create a cleaner, more affordable energy future," Browning added.

The power plant will be located in Karaman, Turkey, and will be rated at 530 megawatts at site conditions, which is enough energy to power more than 600,000 homes. It is scheduled to enter commercial operation in 2015. The engineering, procurement and construction (EPC) services will be provided by Gama Power Systems Engineering and Contracting, Inc.

Dr. Celal Metin, chairman of MetCap Energy Investments, said: "At MetCap Energy, we believe our projects must simultaneously meet the need for increased energy, environmental responsibility and economic growth, while preserving precious water resources. GE's FlexEfficiency technology was evaluated versus other state-of-the-art alternatives and was selected because it is best aligned with our vision for the future. In addition to record-setting fuel efficiency, this power plant will have zero liquid discharge, low emissions and a rapid-response, 28-minute start capability. It accomplishes this using an integrated controls system that provides single-button start for all of the elements of the IRCC power plant. And we've accomplished all of this with very attractive financial returns for our investment. We think this represents the future of power generation."

"GAMA is very excited to be involved in this first-of-a-kind integrated renewables combined cycle power plant together with GE. GAMA's name always has been attached to challenging projects, and we look forward to successfully completing another one where MetCap's decision to use leading-edge technology will ensure implementing many new innovations such as FlexEfficiency, zero liquid discharge, single button start and many more. We believe this project will set a standard for power generation investments where sunshine and wind is abundant in places like the Middle East," said Gökhan İnanç, member of the Board of Directors and deputy managing director of Gama Power Systems.

"Since we started speaking with customers about the FlexEfficiency 50 technology last year, there has been great interest in the unique combination of flexibility and efficiency the plant can offer," said Ricardo Cordoba, president of GE Energy's Western European Region. "Now in just two short weeks, we have announced our first customer MetCap Energy, here in Europe. This technology breakthrough is being embraced by our customers, and it will transform the industry."

On June 6, GE announced an investment and licensing agreement with eSolar, a provider of next-generation concentrated solar thermal tower technology. Under the agreement, GE will license and incorporate eSolar technology and software into its IRCC and standalone solar thermal power plants.

"eSolar is proud to participate in this groundbreaking project, integrating our solar thermal tower technology with GE's wind and FlexEfficiency gas-fired technologies. A significant advantage of solar thermal tower technology versus other renewables is its ability to integrate with thermal power plants and thereby mitigate the challenges of intermittency caused by the weather-related variability of wind and sunshine. This is an exciting new application for us and is clear evidence that our new alliance with GE will generate significant growth potential for our business," said John Van Scoter, CEO and president of eSolar.

The FlexEfficiency 50 plant is the result of more than $500 million invested by GE in research and development to deliver cleaner, more efficient energy. GE also has announced a $170 million investment in a first-of-its-kind full speed full load test facility in Greenville, S.C., that will provide factory validation of its new technology. In addition to the agreements with MetCap Energy and eSolar, GE has signed a memorandum of understanding with Harbin Electric Co. Ltd. to support the introduction of FlexEfficiency in China. Harbin has been teaming with GE since 2003 to provide heavy duty gas turbines for projects in China.
In this article: clean energy, CleanEnergy, energy, energy production, EnergyProduction, FlexEfficiency, ge, GE FlexEfficiency, GE hybrid power plant, GeFlexefficiency, GeHybridPowerPlant, General Electric, GeneralElectric, hybrid power plant, HybridPowerPlant, natural gas, NaturalGas, power, power plant, PowerPlant, solar, Turkey, Turkish power plant, TurkishPowerPlant, wind
All products recommended by Engadget are selected by our editorial team, independent of our parent company. Some of our stories include affiliate links. If you buy something through one of these links, we may earn an affiliate commission.
Share
Tweet
Share