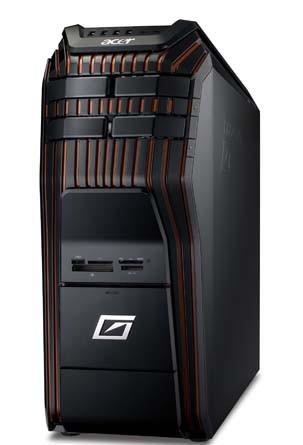 Acer's been mighty busy the past few days, trotting out laptops, desktops, a media streamer, and a multitouch monitor, to boot. But the company wasn't ready to call it a week just yet -- the outfit also announced the Predator G5910 gaming rig for the UK gaming crowd. As you might gather from its reddish accents and claw-like doors -- a "combat-machine" aesthetic, according to Acer -- this is a power tower. These bad boys pack quad-core, desktop-grade Core i5 and i7 processors, up to 16GB of memory, 10 USB 2.0 ports, a 12-in-1 memory card slot, two swappable hard drive bays, and as much as 8TB of storage spread across four SATA drives. In terms of graphics, the most specific thing Acer is saying is that it's compatible with NVIDIA GeForce and AMD Radeon cards, and that it's NVIDIA 3D Vision-capable. You can also overclock this guy using Intel's own Extreme Tuning Utility, but only if you opt for a K-series CPU. This would mean the machine has a P67 chipset -- which is what retailers in other European countries are listing -- and not the H67 listed in the press release. As final flourishes, Acer threw in a handle on the back, and an angled deck on top to keep your inevitable morass of cables under control. UK shoppers can find it in mid-July starting at £599 VAT. PR after the break.
Show full PR text

London, 17th June 2011 – Smooth multitasking, together with the capability of delivering the kind of graphics performance needed to create digital content and enjoy HD entertainment are the most sought after characteristics in today's computer. Shaped by the passion for visually intense multimedia and gaming, the new Acer Predator G5910 excels at handling everything that comes its way, even the most demanding computing and entertainment needs. Equipped with the ultimate in terms of processors and graphics solutions, this desktop is remarkable - inside and out - and will fulfil advanced users and gamers' requirements for stunning HD entertainment and gaming, rich graphics and excellent performance.

The matte black body of the Predator G5910 evokes power and performance, while the angles and grooves on the front add a high-tech futuristic mood. For better accessibility to the USB and audio ports, the top surface is angled and houses a convenient deck flaunting a groove design that allows different sized cables to fit in between, thus avoiding tangles. Plus it comes with a handy back handle for easy transport. In keeping with the overall bold design, the ODD doors have a claw-like mechanism enhancing the combat-machine effect.

The front of the case reveals another remarkable feature, two optional easy-swap hard disc bays to offer flexible expandability when you need it. This means you will always have space for your ever growing multimedia files. When the disk is full all you have to do is replace it with a new one.

The Predator G5910 harnesses the power of the 2nd Generation Intel® Core™ Processor family with H67 Chipset to deliver maximum performance in response to the most demanding tasks such as editing multimedia files, or playing fast-paced games. It can speed through intensive computing applications scaling the performance according to requirements, thus ensuring maximized entertainment and productivity. What's more, optional K series Intel Core i7 or Core i5 CPUs can be overclocked, boosting performance significantly via the Intel® Extreme Tuning Utility (IXTU) to speed though tough tasks.

To let you enjoy movies at their best and play the latest HD games with unrivaled visual richness, the Predator G5910 can be equipped with Blu-ray Disc™ drive that ensures the playback of the best quality video available.

What's more, if you want to transform your gaming experience into an eye-popping stereoscopic experience, just match your predator with the Acer GD245HQ 3D monitor equipped with NVIDIA® 3D Vision™ and a pair of shutter glasses. You will be amazed by the stunning realistic quality of the images displayed.

Featured on the Predator G5910 is the Acer Arcade Deluxe, the best way to manage your digital library. Bundled in a cool and simple interface are:

With up to four high capacity SATA hard disk drives, each with as much as 2TB of space, the Predator G5910 offer exceptional flexibility and all the room you need to store all your digital libraries. The multi-in-one card reader supporting a wide variety of memory cards plus a wealth USB ports make it easy to manipulate and share your files. What's more the system can speed through multitasking and video playback thanks to up to 16 GB of DDR3 memory.

In this article: Acer, Acer Predator G5910, AcerPredatorG5910, Core 2011, Core2011, desktop, G5910, gaming, H67, Intel, Intel Extreme Tuning Utility, IntelExtremeTuningUtility, IXTU, NVIDIA 3D Vision, Nvidia3dVision, Predator, tower
All products recommended by Engadget are selected by our editorial team, independent of our parent company. Some of our stories include affiliate links. If you buy something through one of these links, we may earn an affiliate commission.
Share
Tweet
Share