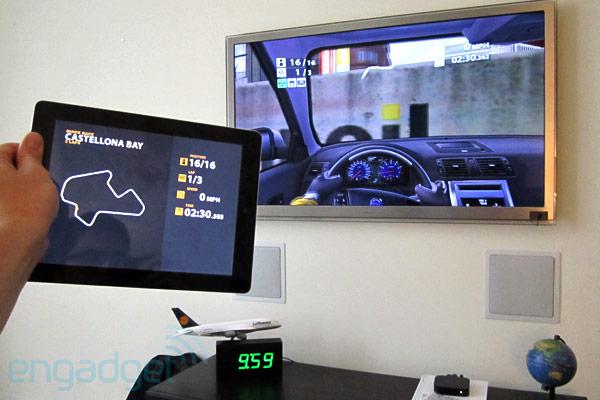 It's just one week after Nintendo unveiled dual-screen gaming on the Wii U at E3, but Apple's iOS 5 beta is already bringing a very similar experience to the living room -- many months before Nintendo's latest console is expected to ship. We installed iOS 5 on an iPad 2 and Apple TV, and took the latest version of Real Racing 2 HD for a test-drive, which enables dual-screen gameplay over AirPlay without the need for Apple's $39 AV adapter. Other games, like Angry Birds, simply mirror the iPad's display (and aspect ratio) on your HDTV, but Real Racing streams 16:9 HD video.

For this game (and we imagine many more to come), you use the iPad as the controller -- both while navigating through menus and in race mode -- while the game appears only on your TV (though the tablet does display some vitals, and a map of the track). There's noticeable lag between the iPad and Apple TV when using AirPlay, which may be an issue for games where timing is important, such as Rock Band, but didn't seem to set us back while playing Firemint's racing game. Overall, AirPlay offered a seamless gaming experience without a single hiccup -- surprising, considering iOS 5 just hit beta last week. It's difficult to do this hands-on justice without a video demo, so jump past the break for an exclusive look at wireless, dual-screen gaming on the iPad and Apple TV.