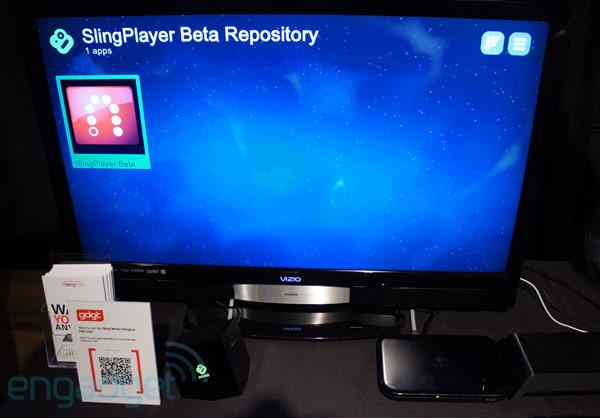 Sling Media teased its SlingPlayer for Connected Devices with a Google TV demo last month, but we had a chance to go hands-on with the TV streaming service on a Boxee Box at tonight's gdgt event in NYC. The player launched without issue on the demo system we saw, and the interface should feel familiar if you've used any of the SlingPlayer mobile apps. Sling says the application will appear in the list of Boxee apps and in the Spotlight on Google TV when it hits public beta within the next month, or you can sign up to be notified on Sling's website. Post-beta pricing and availability details haven't been released, but you can get your TV fix for free for the duration of the beta period. Jump past the break for a quick peek in our hands-on video.

In this article: adobe flash, AdobeFlash, android, app, Boxee, boxee box, BoxeeBox, flash, google, google tv, GoogleTv, sling, sling catcher, slingbox, SlingCatcher, slingplayer, slingplayer for connected devices, SlingplayerForConnectedDevices, video, web app, WebApp
All products recommended by Engadget are selected by our editorial team, independent of our parent company. Some of our stories include affiliate links. If you buy something through one of these links, we may earn an affiliate commission.
Share
Tweet
Share