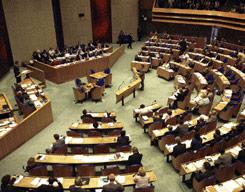 KPN may have shot itself in the foot, but the Dutch parliament certainly helped pull the trigger. Following a very public brag earlier this year that the operator was using deep packet inspection to throttle service and charge users for unintended network usage comes a massive industry buzz kill in the form of mobile net neutrality legislation. Pending approval by the Senate, wireless network operators in the Netherlands will no longer be able to shiv customers for using that nifty rival messaging, or VoIP service of their choice -- Skype and Whatsapp, for starters. The country's telcos put on their lobbying best to whine the usual lines about higher consumer prices, and shaky quality assurance, but the Dutch government called that bluff. Though the ruling bans traffic discrimination, it doesn't preclude tricksier tiered data pricing -- sneaky little carriers. While this win is a first for Europe, OG credit goes to Chile for paving the way. Not yet banned in the Netherlands? Amazing airports, tulips, and cheese wheels.