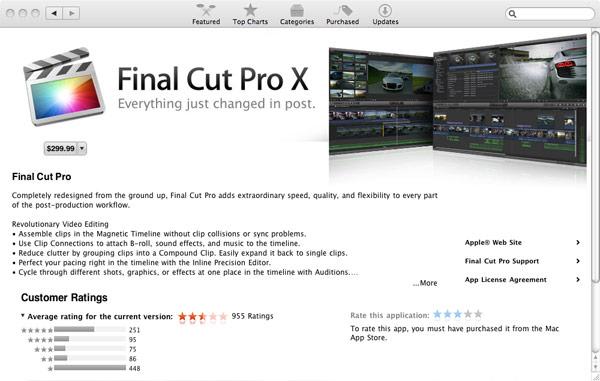 During our call to discuss Final Cut Pro X earlier this week, an Apple product manager boasted about the product's low price, media management, and ground-up redesign. Unfortunately, when starting from scratch, developers seem to have overlooked a few features that professional users have come to depend on, prompting widespread backlash -- both on internet forums and even on Apple's own App Store, where the $300 download-only app currently has a rating of just 2.5 stars (out of five), including nearly 500 one-star ratings. (Note: you must purchase the app before submitting a rating or review.) The New York Times spoke to product managers about these issues, which include an inability to import old FCP files, no multicamera editing, no support for RED cameras, and no ability to specify QuickTime export settings, among many others. Apple says there are (pricey) workarounds available, or fixes on the way for all but the first issue, but head over to the source link for the full rundown at NYT.
In this article: 4K, app, Apple, clip, comedy, COmpressor 4, Compressor4, david pogue, DavidPogue, download, FCP, FCP X, FcpX, Final Cut Pro, Final Cut Pro X, FinalCutPro, FinalCutProX, Mac, Mac App Store, MacAppStore, magnetic timeline, MagneticTimeline, Motion 5, Motion5, new york times, NewYorkTimes, real time, real time video editing, RealTime, RealTimeVideoEditing, red, red camera, RedCamera, software, video, video editing, video suite, VideoEditing, VideoSuite
All products recommended by Engadget are selected by our editorial team, independent of our parent company. Some of our stories include affiliate links. If you buy something through one of these links, we may earn an affiliate commission.
Share
Tweet
Share