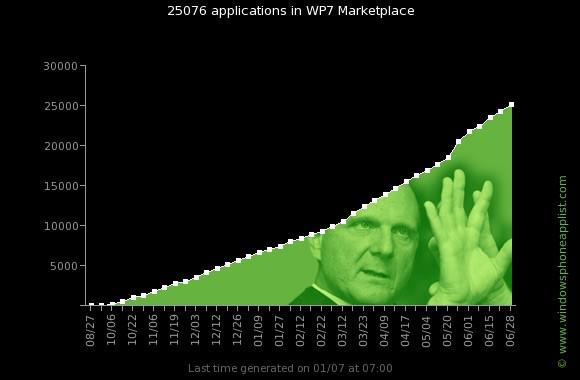 It's not just Apple's App Store striding past milestones today, Microsoft's Windows Phone Marketplace has also rounded a notable marker in its development. Specifically, it's now reported to have passed 25,000 apps by one site tracking comings and goings within it, though that figure's up for debate as the other WP7 apps tracker still lists the total at just under 25k. The main point is that the WP7 ecosystem is growing, and faster than previously at that -- it took until the end of March to accrue 11,500 apps, a span of five months from its launch, whereas the last 13.5k have come in the brisker period of three months. Provided this acceleration continues, and there's no reason to expect it'll slow down with Mango on the horizon, Microsoft's mobile OS reboot promises to be in pretty competitive shape in time for its first anniversary -- a notable feat considering how far behind WinMo had fallen. Perhaps RIM can use this as an instructive example?