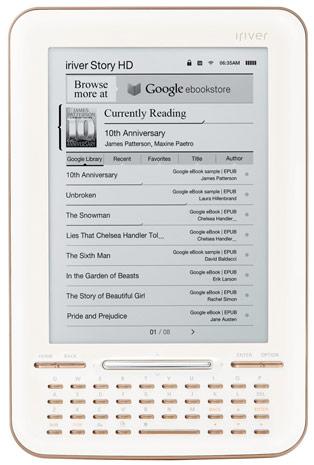 We aren't exactly lacking for digital bookstores, but Google's eBooks offering is indeed one of the slickest around. And evidently, it's not in nearly as many places as the marketers in Mountain View would like. The Goog just announced that iRiver's Story HD would soon become the first Google eBooks-integrated e-reader, with the new model going on sale July 17th at Target. It'll still sell for $139.99, and none of the actual hardware specifications will change from the existing model. Of course, the eBooks platform has been open to all publishers, retailers and manufacturers from the start; it's just that iRiver has become the first manufacturer to heed the call. Naturally, Google's teasing us by openly stating that more of these are on the way, and if you just so happen to be an e-reader maker... well, it'd certainly love to have a chat.
In this article: api, book, e book, e books, e reader, e readers, e-book, e-books, e-reader, e-readers, ebooks, EReader, google, google ebooks, GoogleEbooks, iriver, iriver story hd, IriverStoryHd, story hd, StoryHd
All products recommended by Engadget are selected by our editorial team, independent of our parent company. Some of our stories include affiliate links. If you buy something through one of these links, we may earn an affiliate commission.
Share
Tweet
Share