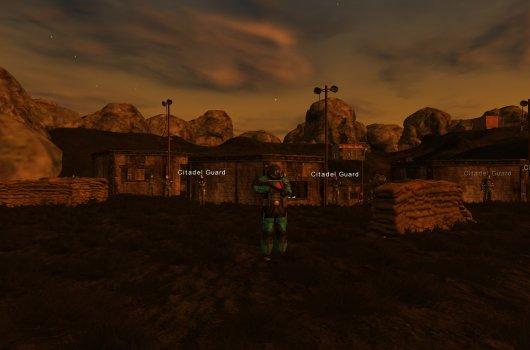 Normally, I prefer to PvP in Fallen Earth. It gives me the biggest sense of accomplishment and it's a handy way to gain tons of faction rep. But, while I'm leveling up my PvP clones and getting used to the new combat system, I've been doing mostly PvE. I went to Alpha County and ran some missions, but I'll go into more detail on that later in this post. I also got a chance to check out the progress towns. I have to admit, they are fun, and rewarding too!

Regular old PvE seemed a little stale, even with a whole new setting and all new missions. There were track-and-kill missions, delivering items, and defend against waves of enemies missions. Although they were all very well written, and in some cases, scripted, it was still very much the same old thing. The missions simply aren't intriguing enough for me to want to do them twice, much less four times.

The missions in Blockade were more of the same, with a smattering of sporadic PvP. The rewards in Blockade were quite beefy faction- and XP-wise, so I'll probably wind up repeating them. Since most PvPers are still leveling or are disenchanted with (or possibly still trying to figure out) the new system, there isn't much action in Blockade. There is also little vault access, so it wasn't a popular hangout for my very crafting-oriented clones. In fact, the vaults and merchants in Alpha County are so lackluster, I just go back to Los Alamos at the end of a Sector 4 tour.

There is something fun to do in Deadfall now, though. I'm not saying that killing the faction vet mobs isn't loads of fun, but now there's something I might engage in on a daily basis.

Enter Citadel. Citadel is the name of the progress town in Deadfall. What is a progress town? It is a player-built town that gets attacked by NPC groups with the intention of destroying it. But you might ask: "There are towns everywhere, why should we care about this one?" Because when it is fully built, it has almost all the amenities of any large town in Fallen Earth. In some ways, these towns are better than a static town.

There are three of them. Progress in Sector 2, Stronghold in Sector 3 and Citadel in Deadfall. Each one has varying degrees of difficulty and rewards based on the level range of their locality. They all function similarly in almost every way, minor details and difficulty differences aside. The players must first remove the hostile NPCs from the vicinity. Once that is done, they can begin building. The central building, which is always present, has the town crier and the skills merchant.The town crier will inform you on the town's status and the merchant sells the books that hold the crafting recipes for the construction of the various buildings.

The most important building is the mission building. Without it, you can't receive the mission to defend the town. Defending it successfully will net you a good deal of XP and a new type of currency: Defense Tokens. These can be used to buy Mutated Juniper, Pre-Fall Tech and Volatile Chemicals. The Junipers are needed for some new consumables (which are great items), and the Pre-Fall Tech is used on the new dyeable faction armor. Volatile Chemicals are, of course, for equipment upgrades.

There is also a merchant building, which you will need to buy the quest rewards with your Defense Tokens. There is also a merchant that sells ammunition and other niceties. Another building that is not essential, but will make your town super-awesome, is the storage building. This bad-boy has all four vaults in it. You can even build a social building that will give you the rest buff that you can get in the bunker bars. And for those who like to manipulate the market anywhere and anytime will be pleased to know that they can build an auction house for the town, too. The only thing your town will lack is crafting workshops and merchants. Maybe someday, we'll get those too.

Another thing that can be added to the town is defenses. These include guard bunkers, medical facilities and landmines. You can even place mutant hydra weed that will grow and poison your attackers as they funnel into the kill-zone. I noticed that (at least in Citadel), with solid defenses and several players, the attackers don't stand a chance. I've heard conflicting reports from the other towns, but Citadel stands fast against its aggressors most of the time.

In the coming days I'll be spending a good deal of time in Citadel. The rewards are good, and there are plenty of amenities -- what's not to like? Sure, my crafting will take a little longer, and I'll have to mail myself certain materials, but I think one of my clones (I haven't decided who yet) will be calling Citadel home.

See you here next week, unless you want to visit lovely Citadel and repel a horde of bloodthirsty mutants from our quaint little shantytown -- in which case, I may see you sooner.

Ed Marshall has been playing Fallen Earth since beta and leads the KAOS clan. Wasteland Diaries is his weekly column that covers all aspects of Fallen Earth: PvE, RP and PvP. To contact Ed, send an email to edward@massively.com, find him on the official forums as Casey Royer, or hunt him down in the wastelands as Nufan, Original, Death Incarnate, and Knuckles Mcsquee.
In this article: alpha-county, blockade, citadel, combat-system, deadfall, defense-tokens, fallen-earth, fallen-earth-llc, gamersfirst, juniper, pre-fall-tech, progress, progress-towns, sector-4, stronghold, volatile-chemicals
All products recommended by Engadget are selected by our editorial team, independent of our parent company. Some of our stories include affiliate links. If you buy something through one of these links, we may earn an affiliate commission.
Share
Tweet
Share