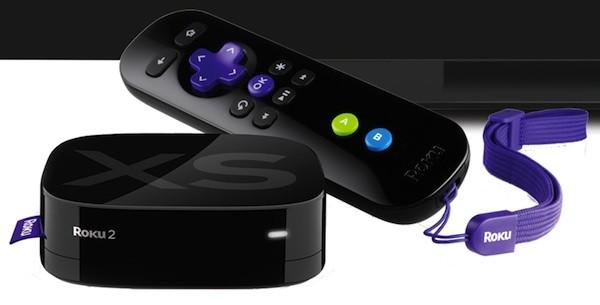 Roku has gone from a barely known streaming media box manufacturer to a retail darling in a remarkably short amount of time (the last hardware revamp launched less than a year ago) and it's back with more new hardware to continue the assault. The Roku 2 lineup will put their (much smaller) footprint in the spaces left by their predecessors when they hit shelves later this month without changing the price one bit. Besides being more energy efficient, it brings new channels including Angry Birds, Epix, MLS and more, while also upgrading the Netflix experience with support for subtitles, surround sound and 1080p video. The pricing tiers of $60 (HD), $80 (XD) and $100 (XS) remain; while stepping up to the XD adds 1080p video output, splurging for the XS adds a game remote (a $29 accessory), included copy of Angry Birds plus Ethernet and USB ports. If you still need confirmation after all the leaks, there's another pic and a press release after the break, plus a quick demonstration of the box by the cutest product spokesperson of all time.

"Roku is the best-selling streaming player on the market because of its simplicity, breadth of content and value. Now we're setting the bar even higher with Roku 2 – a more powerful platform with new features including casual gaming," said Roku Founder and CEO Anthony Wood. "We've worked closely with Rovio to bring the first full version of Angry Birds to the TV – and best of all, we're including it for free with the top-of-the-line XS model."

A Streaming Player for Everyone

All three Roku 2 models feature built-in wireless, Bluetooth for connecting a game remote and a MicroSD slot to support additional game storage. The Roku 2 HD player supports up to 720p HD video while the Roku 2 XD player supports up to 1080p HD video. Roku 2 also adds several significant enhancements to its acclaimed Netflix experience, including support for English subtitles, Dolby Digital Plus and up to 1080p HD video quality (on the XD and XS models). The Roku 2 XS player provides the ultimate casual gaming experience on the TV. Now, Angry Birds fans who love to launch birds at jeering green pigs can enjoy the full version of the game for the first time on the TV, free of charge. The Roku 2 XS includes the new Roku Game Remote with motion control which has been optimized for bird-slinging action on the big screen. The Roku 2 XS also features an Ethernet port for a wired Internet connection and a USB port for playing music, videos, and photos off of any USB

The Roku 2 HD, the Roku 2 XD and the Roku 2 XS are expected to be available by the end of July for suggested retail prices of $59.99, $79.99 and $99.99 respectively. Retailers include Roku.com, Amazon.com, Best Buy, Fry's Electronics and RadioShack.

Since all Roku 2 players support casual games, customers will be able to purchase the game remote with motion control for use with the Roku 2 HD and Roku 2 XD players. The Roku Game Remote will be available in the coming weeks as part of a bundle that includes a 2GB MicroSD card for a suggested retail price of $29.99 at Roku.com.


###
In this article: 1080p, angry birds, AngryBirds, engadget awards, engadget awards 2011, EngadgetAwards, EngadgetAwards2011, gmaing, mls, netflix, rf remote, RfRemote, roku, roku 2, roku 2 hd, roku 2 xd, roku 2 xs, Roku2, Roku2Hd, Roku2Xd, Roku2Xs, set-top box, Set-topBox, streamer
All products recommended by Engadget are selected by our editorial team, independent of our parent company. Some of our stories include affiliate links. If you buy something through one of these links, we may earn an affiliate commission.
Share
Tweet
Share