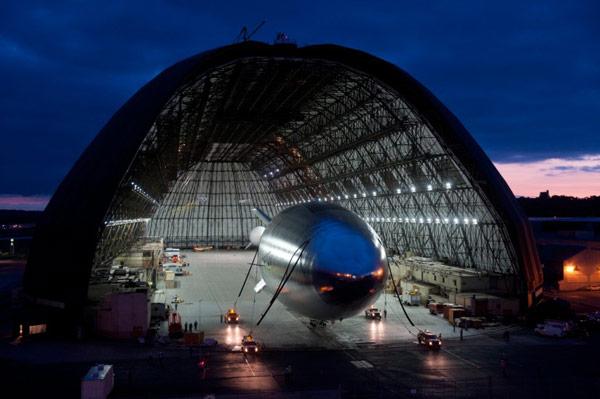 Because dirigibles were such a great idea the first, completely non-disastrous time around, Lockheed Martin and the US Army have teamed up to bring the quaint technology back into our hyper-modern era. The lighter-than-air vehicle got a new lease on unmanned flight life when it launched yesterday from its base in Akron, Ohio. The High Altitude Long Endurance-Demonstrator (HALE-D for short) reached 32,000 ft during its maiden voyage before technical difficulties cut the test short, forcing an emergency landing in the deep woods of southwestern Pennsylvania. Despite the flight-aborting hiccup, the global security company is all smiles, citing the successful demonstration of "communications links, [the] unique propulsion system, solar array electricity generation [and] remote piloting communications." Future real-world versions of HALE-D could serve as a military "telecommunications relay system" over foreign terrain -- like Afghanistan -- where radio signals can't penetrate. The Defense Department contractor is currently retrieving the airship from its foresty crash pad, but you can bet some locals already called this close encounter in to the local papers. Skip past the break for Archer's take on our government's latest airborne effort.

The aircraft successfully launched at 5:47 a.m. out of the Airdock in Akron, Ohio. The airship reached an altitude of approximately 32,000 feet, however, a technical anomaly prevented the airship from attaining its target altitude of 60,000 feet and the HALE-D team decided to terminate the flight.

The aircraft descended without incident at 8:26 a.m. in southwestern Pennsylvania to a predetermined landing location. Lockheed Martin is coordinating with state and local authorities to recover the airship. We have confirmed that no injuries or damage were experienced during this landing in a heavily wooded area.

The HALE-D is an unmanned solar-powered lighter-than-air vehicle designed to hover 12 miles above the earth's surface for extended periods of time. The airship is designed to demonstrate advanced new technologies and capabilities for keeping American soldiers safer through improved communications.

Lockheed Martin is in the process of recovering the airship and will conduct a full evaluation.

The U.S. Army Space and Missile Defense Command/Army Forces Strategic Command (SMDC/ARSTRAT) contracted with Lockheed Martin to develop the High Altitude Airship program to improve the military's ability to communicate in remote areas such as those in Afghanistan, where mountainous terrain frequently interferes with communications signals. The airship will serve as a stationery long-term overhead platform for a telecommunications relay system that will expand the range and reliability of battlefield communications.
In this article: airship, airships, dirigible, dirigibles, HALE-D, High Altitude Long Endurance-Demonstrator, HighAltitudeLongEndurance-demonstrator, lighter than air, lighter than air vehicle, LighterThanAir, LighterThanAirVehicle, lockheed martin, LockheedMartin, military, test flight, TestFlight, us army, UsArmy
All products recommended by Engadget are selected by our editorial team, independent of our parent company. Some of our stories include affiliate links. If you buy something through one of these links, we may earn an affiliate commission.
Share
Tweet
Share