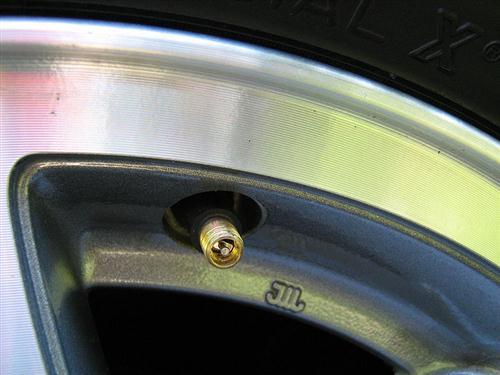 Reminiscent of Ghostbuster's Marshmallow Man, new Goodyear tires might just Stay-Puft on their own. The company is developing Air Maintenance Technology (AMT) tires with built-in pumps to keep themselves at the perfect pressure. The reason? Even slightly under-inflated tires can drop your mileage by 3.3 percent, costing you cash at the pump. For highway-hustling commercial trucks that's a whole lot of moola, leading the US Department of Energy's Office of Vehicle Technology to grant Goodyear $1.5 million towards self-plumping commercial tire development. For those of us who don't wear mesh hats, Goodyear is working on a consumer version in its Luxembourg lab. It's unclear exactly how they will work, but earlier implementations have a pipe that's compressed as the tire rolls, allowing air to enter the tire without bursting thanks to a pressure sensitive valve. With so much automated car technology now all we need is the kind that cleans out its own trunk and pumps its own gas. Check out the full PR after the break.
Show full PR text
New Goodyear Innovation Could Make Tire Pumps Obsolete
Government Grants to Help Quicken Development

AKRON, Ohio, August 11, 2011 – The days of manually adding air to under-inflated tires could be a distant memory thanks to a new innovation under development in laboratories at The Goodyear Tire & Rubber Company.

Keeping tires properly inflated doesn't just eliminate the practice of checking a tire's air pressure and finding a tire pump and gauge that works. It also can mean real savings at the fuel pump.

Whether you drive a passenger vehicle or a commercial truck, underinflated tires result in between a 2.5 percent and 3.3 percent decrease in fuel mileage, according to government and industry research. At today's prices, that translates to about 12 cents per gallon at the pump.

Goodyear's Air Maintenance Technology (AMT), will enable tires to remain inflated at the optimum pressure without the need for any external pumps or electronics. All components of the AMT system, including the miniaturized pump, will be fully contained within the tire.

"While the technology is complex, the idea behind the AMT system is relatively simple and powered by the tire itself as it rolls down the road," said Jean-Claude Kihn, Goodyear senior vice president and chief technical officer.

"A tire that can maintain its own inflation is something drivers have wanted for many years. Goodyear has taken on this challenge and the progress we have made is very encouraging," said Kihn. "This will become the kind of technological breakthrough that people will wonder how they ever lived without."

Goodyear did not provide an estimate as to when this technology would be available at tire retailers, but said the timetable would be accelerated due to recent government research grants in United States and European Union.

The United States Department of Energy's Office of Vehicle Technology Wednesday announced it has awarded a $1.5 million grant for research, development and demonstration of the AMT system for commercial truck tires. The grant will be administered by the National Energy Technology Laboratory and work will be conducted at Goodyear's Innovation Center in Akron, Ohio.

In July, Goodyear successfully applied for a grant from the Luxemburg government for research and development of an AMT system for consumer tires. That work will be conducted at Goodyear's Innovation Center in Colmar-Berg, Luxembourg.

"While similar in concept, there are significant differences in AMT systems for consumer and commercial tires," said Kihn. "The tangible support from both the U.S. and Luxembourg governments underscores the value of these projects and the many positive benefits they can provide drivers around the world."

In addition, The DOE's Office of Vehicle Technology today also announced that it will award a $1.5 million grant for a joint project between PPG Industries and Goodyear to improve the rolling resistance and fuel efficiency of tires. The project's objective is to increase average fuel efficiency of passenger vehicle fleets through use of new tread and inner liner technologies.

"Advanced technologies that are invisible to the human eye – like those we are working on with PPG – will help to dramatically improve fuel efficiency of tires while maintaining other important qualities such as traction and tread-life," said Kihn.
In this article: air pressure, AirPressure, automated, fuel efficiency, fuel efficient, FuelEfficiency, FuelEfficient, gas, gas mileage, GasMileage, goodyear, goodyeartire, luxembourg, ppg industries, PpgIndustries, pressure, self-inflating tire, self-inflating tired technology, Self-inflatingTire, Self-inflatingTiredTechnology, tires, us department of energy, us office of vehicle technology, UsDepartmentOfEnergy, UsOfficeOfVehicleTechnology
All products recommended by Engadget are selected by our editorial team, independent of our parent company. Some of our stories include affiliate links. If you buy something through one of these links, we may earn an affiliate commission.
Share
Tweet
Share