D. Murph
August 29th, 2011
In this article: camera, digital slr, DigitalSlr, dslr, e-p1, e-p2, e-p3, E-PL1, E-PL2, ILC, interchangeable lens, InterchangeableLens, MFT, micro four thirds, MicroFourThirds, Olympus, pen, PEN E-P3, PEN E-PL3, PEN E-PM1, PenE-p3, PenE-pl3, PenE-pm1, review, video
Being the gadget hounds that we are, we're still struggling to fully digest the Micro Four Thirds / interchangeable lens camera market. The performance freak in us suggests that one simply buy a smaller DSLR given the parallel annoyance of carrying around a bag full of lenses, but the mobility junkie in us does appreciate the downsizing -- however minor. Olympus' PEN line has been a beautiful one from the start, but one that found itself out of consideration for many due to the poor value proposition. Even the newest PEN E-P3 isn't a bargain; at $900 with a somewhat versatile 14-42mm lens, it's well north of most entry-level DSLRs, and on-par with many mid-rangers. So, is it really worth splurging on a slightly more compact frame, devilishly good looks and "the world's fastest autofocus system?" Read on for our take.
%Gallery-130071%
Olympus 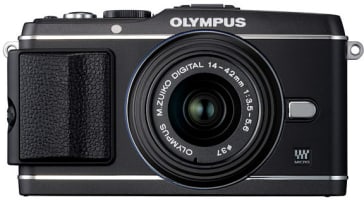 It's a PEN! It's beautiful! In all seriousness, we simply adore the styling here, and while it's not quite as retro-ific as Fujifilm's X100, there's plenty of class and sophistication here to go around. We also love just how how many buttons, wheels and knobs are splattered everywhere. We know -- novices will probably detest the learning curve -- but the target market here will no doubt appreciate it. The only major knock is the absence of dedicated ISO and White Balance buttons; that first one is particularly frustrating, but that's coming from a crew that has grown spoiled by a simple wheel-turn ISO adjustment on Nikon's D3S.

The company still hasn't throw in an optical viewfinder, but the stunning OLED touchscreen is about as good as it gets for this segment. We didn't find the touchpanel functionality to be all that useful (even when touching to focus on objects in the dark, it refused to obey), but at least it's easy to disable. We also appreciate the dedicated Movie Record button, which can get an HD clip rolling regardless of where the Mode Dial is at. The pop-up flash is a major improvement (you know, compared to not having one at all), and the menu system / user interface is downright beautiful. In fact, we wish every other camera maker out there would have a gander at what Olympus has done here; the text is crisp, the menus are easy to navigate and the icons are beautiful to look at.

For an absurdly in-depth look at what the "new" 12.3 megapixel Live MOS sensor is capable of in just about every scenario, we'd encourage you to peek the extra reviews linked below in our 'More Coverage' section. From an amateur's viewpoint, we have to confess that our love affair with the design and usability don't entirely bleed over to the image results. For all intents and purposes, the output you'll get here is eerily similar to that found in the E-P2. Even more depressing is the low-light performance; while the ISO ceiling sits at 12,800, anything over 3,200 results in a tear-jerking amount of noise.

We also aren't the hugest fans of the iconic "Olympus" color results -- it's not exactly saturated, but it has this unmistakable "digitized" look that is notably absent in any mid-range DSLR on the market. The built-in ART and SCENE filters are clever, and most 'em do more good than harm, but we'd recommend steering clear for anyone that owns Photoshop and / or Lightroom. You're just better off capturing a "standard" image, and then adding the desired effects afterwards. If you embed the effect in the camera, there's no "standard" image to revert back to.
%Gallery-131646%
%Gallery-131647%

On the upside, the autofocus system truly is a monumental improvement over the E-P2. It's shockingly quick, and ranks up there with many of the higher-end DSLR rigs that we've handled. The bundled 14-42mm kit lens is rather handy, and it's not awkwardly large, either. The company threw in its 12mm wide-angle pancake as well, and while it did a similarly great job, the $800 price tag on that glass alone is almost shameful. In fact, just thinking of it brings us back to the biggest argument against this form factor: if you're going to invest thousands in lenses, shouldn't you invest in a marginally larger body with far more amenities? At any rate, take a dive into our sample galleries for a taste of what this guy offers.

On the movie side, the 720p quality is just beautiful... if you've got it mounted on a tripod. Even the slightest hand movement introduces a disgusting amount of "jelly," as is showcased in our samples below. It's a shame, really -- you can pretty much bet that whatever video you shoot handheld will be marred by an impossible-to-miss jelly effect. Olympus rates the battery for 330 shots, and in our testing we managed just over 200 snaps mixed with a half-hour of video and untold minutes of idly leaving the LCD on. Not particularly longevous, but it should be plenty to get you through the average vacation day.

At $900, the E-P3 kit is a far better value than the E-P1 and E-P2 before it, primarily due to the overhauled autofocus system and stunning OLED touchpanel. But when you realize what kind of money you'll be pouring into lenses -- objects that make this guy far less portable from a holistic viewpoint -- the reality starts to sink in. This is still a pricey luxury aimed at a niche, albeit one that's growing by the day. In our estimation, the only meaningful size savings associated with a Micro Four Thirds rig is in the body itself, and if you plan on using the kit lens alone, you may be fine. But if you plan on actually taking advantage of the whole interchangeable lens function, you could be better off buying glass for a smaller Digital SLR.

For those dead-set on this category, though, the E-P3 doesn't innovate enough from an image quality standpoint to justify an upgrade, and for newcomers, that $900 price point is awfully hard to swallow. Here's hoping the E-P4 will hit with an MSRP that doesn't give us so much pause.
All products recommended by Engadget are selected by our editorial team, independent of our parent company. Some of our stories include affiliate links. If you buy something through one of these links, we may earn an affiliate commission.