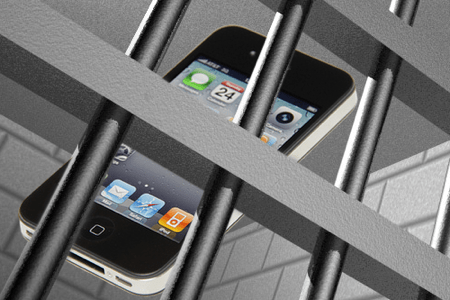 The San Jose Mercury News is reporting that two people involved in last year's "iPhone 4 prototype found in a bar" fiasco are being charged in San Mateo County Superior Court for their respective roles in the incident, which led to numerous photos of the upcoming iPhone model being posted online months ahead of its official release.

Brian Hogan, the individual who is credited with finding the iPhone, is being charged with one count of misappropriation of lost property, a misdemeanor in the state of California. Sage Wallower, Hogan's friend who assisted him by contacting a number of tech blogs and offering to sell the device to them, is also being charged with possession of stolen property.

Neither of the two individuals appeared at the hearing regarding the charges, and the attorneys for both men entered not guilty pleas on their behalf. A second hearing on the case is expected on October 11th, and a trial date has been set for November 28th, although Hogan's attorney has indicated that his client has taken responsibility for his actions, and he plans to work with prosecutors to strike a plea bargain.

It was reported earlier this month that the blog responsible for purchasing the iPhone and releasing the pictures, Gizmodo, will not be charged in the incident. Jason Chen, the blogger who facilitated the exchange and wrote the post, will also not be charged. Chen's house was searched early in the investigation, and several items were seized, but later returned.

In this article: brian hogan, BrianHogan, charges, gizmodo, iPhone, iphone 4, Iphone4, jason chen, JasonChen, prototype, stolen
All products recommended by Engadget are selected by our editorial team, independent of our parent company. Some of our stories include affiliate links. If you buy something through one of these links, we may earn an affiliate commission.
Share
Tweet
Share