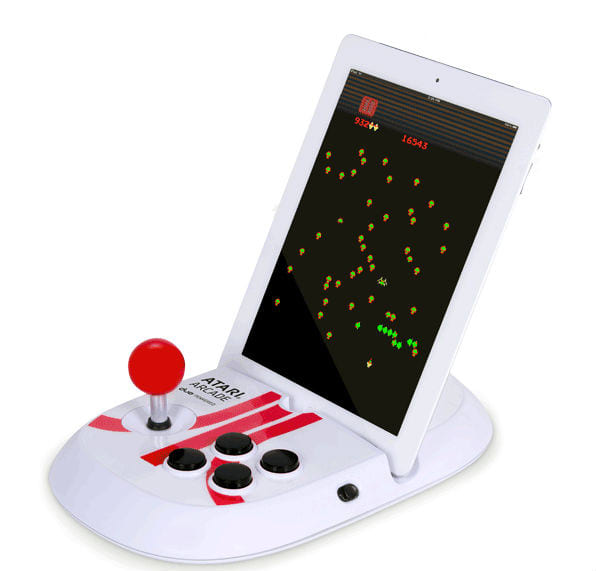 iMAME4All gains experimental support for iCade, iOS gamers gain infinite happiness
MadCatz proves its soul still burns with Soul Calibur V Arcade FightStick Soul Edition
Gameloft bringing a dozen iPad games to Jetstar flights, curbing in-flight boredom with UNO
Yearning to relive the classics (Lunar Lander, anyone?) on your iPad, replete with that authentic arcade feel? It wasn't long ago that we reviewed ThinkGeek and Ion's formidable iCade, but at $100, it was -- and still is -- a pricey portion to stomach for an occasional retro gaming fix. Fast forward to the present, and Atari's paired with Discovery Bay Games to create their own official spin on an iPad arcade adapter, fittingly dubbed the Arcade Duo-Powered Joystick. Unlike the iCade, it doesn't use Bluetooth and requires no batteries -- you simply dock your iPad into its 30-pin connector. The joypad is specifically made to work with Atari's Greatest Hits app, and it's set to land in early October for a slightly more wallet-friendly price of $60. We were able to slam its controls a bit while playing through various levels of Major Havoc and the like, and you'll find our impressions after the break.

The Atari Arcade Duo-Powered Joystick is great peripheral for retro gaming Atari-style on the iPad.

Be the first to review the Atari Arcade?
Your ratings help us make the buyer’s guide better for everyone.
Write a review

The unit itself looks akin to a racing-striped Shelby Cobra, but there's just one thing we have to get out of way: it feels plasticky. Plasticky in the way a Samsung Galaxy S II feels solid, although far from finely machined like a Nokia N8. It's not awful by any means, but it really does give off a toy-like vibe. On the underside we're greeted by four large rubber feet that kept it in place whether we used it on wood, plastic counter tops or even glass. On top, there's an eight-way clicky joystick, four buttons and a rubber-lined recess with a tilting 30-pin connector and lock tabs to ensure it'll seat either flavor of Apple's slate. Getting our iPad 2 hooked into the Arcade with a snug fit wasn't terribly hard, but it did take a bit of finesse -- and a few grunts of frustration -- to get it docked properly. Notably, we found that thin cases like Speck's Smartshell wouldn't play nice with the device, so you'll have to keep your tablet bare. On more positive notes, the Arcade was easy to use while laying down with it on our stomach or resting in our lap while sitting. The fixed angle for the screen also worked amiably in most situations.

With our iPad ready to go, we fired up the familiar Atari app and started our sessions. For every game we simply selected the Arcade as our input method and we were pwning AI noobs (we'd like to remember as such, anyway) like it was the 80's. Putting it simply, the controls on this gizmo feel miles better than the iCade. The joystick is springy with a pleasing amount of resistance and the buttons, although a bit hollow, have a satisfying click with every press. We felt confident pushing its buttons, as all of our inputs always registered -- even when levels got hectic. The four-button layout may seem paltry up against others, but it works out great considering most games in the app only use two or three buttons. Like usual, games only take up a portion of the screen with some blank space where the controls would be. In the Arcade's case, it works out because visuals stay in-aspect without getting blocked by the joystick or our hands -- this also allows the control layout to be recalled if you need a reminder. All that said, we do have a few notable gripes with the design.

For one, the dock doesn't allow you to use the iPad in landscape, and secondly, the buttons lack the usual arcade feel and concave shape. The most annoying quirk, though? The Arcade surprisingly only works while you're in-game and can't be utilized for the in-app menus. We should further note -- as was the case when the iCade hit shelves -- you're limited to a grand total of 100 games. Missile Command remains free and past that you'll pay a buck for one of 25 game packs, or $15 for the whole library. The problem is that many of the titles are merely souped up versions (e.g., Asteroids and Asteroids Deluxe), so you don't end up with 100 drastically different experiences. Considering you won't be using the Arcade outside of the app it's something to keep in mind.

When it comes down to it -- and if we had to choose between this and the iCade -- we'd say the Atari Arcade takes the high score if you're in it for the control and not the looks. Sure, it may not be as pleasing to the eye or have Bluetooth support, but the Atari Arcade didn't need to eat batteries and served us well as a retro gaming pad. As awesome as the Arcade is, though, $60 is a lot to spend for the limited use you'll be afforded, and we'd really only recommend it for die-hard Atari fans -- folks who won't find the nostalgia wearing off before their fingers are sore.
In this article: accessories, accessory, apple, apple ipad, apple ipad 2, AppleIpad, AppleIpad2, arcade, Arcade stick, ArcadeStick, atari, atari arcade, AtariArcade, ataris greatest hits, AtarisGreatestHits, Discovery Bay Games, DiscoveryBayGames, Duo Powered, DuoPowered, gamepad, gaming, GreatestHits, hands-on, icade, idevice, ipad, ipad2, joystick, retro, Retro Arcade Stick, RetroArcadeStick, review, tablet accessories, tablet accessory, TabletAccessories, TabletAccessory, videogame, videogames
All products recommended by Engadget are selected by our editorial team, independent of our parent company. Some of our stories include affiliate links. If you buy something through one of these links, we may earn an affiliate commission.
Share
Tweet
Share