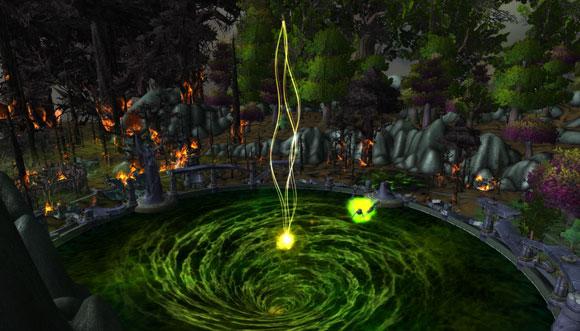 Today seems to be a huge day for patch 4.3 news, as Blizzard has just released a second 4.3 dungeon preview, this one for the Well of Eternity. After opening the gateway to the past in End Time, players will be transported back in time to Azshara's palace during the War of the Ancients to retrieve the Dragon Soul. Sounds easy enough, right? Yeah, not so much -- the Dragon Soul is busy hovering over the Well of Eternity and being used to open the portal that will allow Sargeras into the world.

In order to retrieve the Dragon Soul, players will have to fight and defeat the enemies that stand in the way, including Queen Azshara herself. Also seen in Well of Eternity are two names that should ring a bell to those familiar with lore -- the pit lord Mannoroth, whose blood is responsible for the corruption of the Orcish race, and Varo'then, head of Queen Azshara's personal guard. We already know what happens to Mannoroth and Varo'then in the future, so what will happen if we mess with them in the past?

It seems as though all this mucking around in time is something players will have to be considerate of, however. According to Zarhym, "The tragic events which took place at the Well of Eternity must ultimately come to pass, leading to the Great Sundering, the creation of the Maelstrom, and the loss of countless lives."

I don't know about anyone else, but I'm looking forward to saying hello to the younger versions of Tyrande, Malfurion, and Illidan. Check out the official website for the full preview, with plenty of images and more information on the various bosses in the dungeon.

Brace yourselves for what could be some of most exciting updates to the game recently with patch 4.3. Look at what's ahead: new item storage options, cross-realm raiding, cosmetic armor skinning and your chance to battle the mighty Deathwing -- from astride his back!
In this article: demon-soul, dragon-soul, illidan-stormrage, malfurion-stormrage, mannoroth, nozdormu, patch-4.3, queen-azshara, tyrande-whisperwind, varo-then, well-of-eternity, world-of-warcraft-patch-4.3, wow-patch, wow-patch-4.3, wow-patch-4.3-news, wow-patch-news
All products recommended by Engadget are selected by our editorial team, independent of our parent company. Some of our stories include affiliate links. If you buy something through one of these links, we may earn an affiliate commission.
Share
Tweet
Share