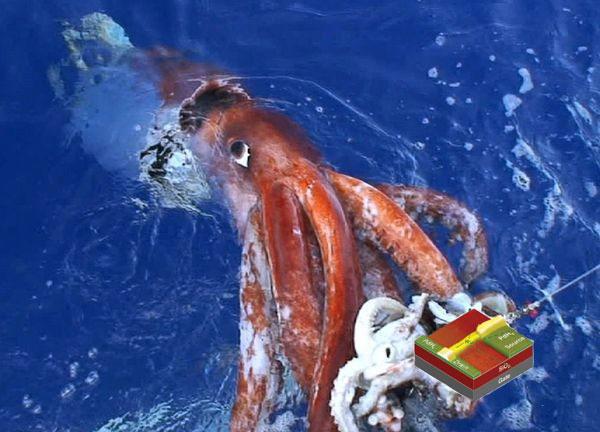 If we ever manage to capture a live giant squid, researchers at the University of Washington are going to have a field day. Enterprising minds at the institution's materials science and engineering department have discovered a use for chitosan -- an extract made from squid pen or crab shells that could lead us down a cybernetic road to human / machine interfaces. The team incorporated the organic compound into their field-effect transistor prototype, and effectively created the first protonic circuitry "that's completely analogous to [the way] an electronic current" can be manipulated. Naturally, the silicon-based tech isn't ready (or safe) for implantation into humans just yet, but could one day be used to control biological functions, sending on / off commands to our bodies. So, maybe we won't have to fear that robot apocalypse, after all. You never know, give scientists ample time to fully flesh this advancement out and Spielberg's next great cinematic, sci-fi opus could wind up becoming a cyborg rom-com. Stranger things have happened folks.
In this article: biological interfaces, BiologicalInterfaces, chitosan, interfaces, protonic transistor, protonic transistors, ProtonicTransistor, ProtonicTransistors, protons, research, squid, squid pen extract, SquidPenExtract, transistors, University of Washington, UniversityOfWashington
All products recommended by Engadget are selected by our editorial team, independent of our parent company. Some of our stories include affiliate links. If you buy something through one of these links, we may earn an affiliate commission.
Share
Tweet
Share