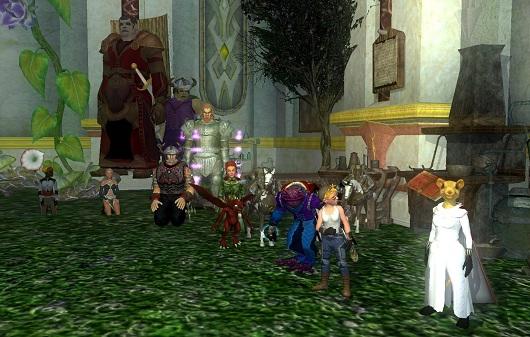 This week, I was all set to share my personal experiences as I continue my time on the EverQuest II Extended server. I was going to talk about guide events (or lack of them) and my amazing feats with my newly purchased Wand of Obliteration (I killed a Spectre in Sinking Sands at level 13 but only got about 1300 experience, which is not much more than I was getting for white and yellow cons at my level). But then I realized that if we're really going to roll up our sleeves and tackle the issue of free-to-play, we need to hear from those who exist on the other side of the virtual wall, those who have been silently playing in a world cut off from the rest of the Legacy servers, both in game and out.

In this week's Tattered Notebook, I tracked down guild leaders and members of guilds on the Freeport server in order to hear from them what their gaming experience is like. While I had been playing my bronze account for the column, I made a character on my main account in order to have access to chat channels and in-game mail in order to get in touch with them. I spoke to two of the top raiding guilds on the server as well as a large crafting guild. We talked about raiding, the economy, and the community overall. What I uncovered was eye-opening. Read on for their stories.

I wanted to get some insight into how much of an impact mastercrafted armor and harvestables have on the in-game broker and tradeskill market. It's important to note that right now, mastercrafted armor is not available on the Station Cash Marketplace, and harvestables have recently been tagged as heirloom, meaning that players can no longer trade them or sell them on the broker for plat. Still, I wanted to see whether it's detracted from the gameplay of those who primarily craft. I tracked down and spoke with Briarios and Wongwhey of the guild Crafting Critters. Not only were they honest and candid, but they extended me an invitation to their guild so I could visit their guild hall and meet their members.

I asked them about their background, and to my surprise, both were players on legacy servers who had taken time away from the game and had chosen to come back on Freeport specifically because of the free-to-play option. Briarios admitted that he was pretty skeptical of playing on a free-to-play server with a cash shop, but his wife talked him into giving it a try, and he's glad that he did. He and Wongwhey met and eventually formed up the guild, which carries over 50 active members across multiple time zones.

Both have a unique perspective on the tradeskill market on Freeport because they can compare it to the market on their respective legacy servers. Overall, they don't seem to be bothered by the presence of mastercrafted armor or the harvestables. Wongwhey pointed out that it's a lot easier for new players and lower-level players to have access to those items, and he explained how it might be hard for players starting off because they can't afford to buy armor on the broker and might not be high enough level to craft it. Briarios added that he initially purchased mastercrafted gear but didn't feel the need to purchase high-level gear because he has friends and guildmates who can make it for him (and he can craft weapons in return). As for harvestables, when they were tradeable, they actually kept the prices of rares down so that crafters had an easier time making mastercrafted items. Now that those items are heirloom, Briarios and Wongwhey have already seen a jump in prices on the broker, meaning they'll probably have to spend time harvesting the rares themselves. When I asked them which Marketplace items were the most popular with their guild, Wongwhey said it was the vanity items, not the crafting resources, that are purchased most by members.

I asked them about smoothness of gameplay, a long-time issue on the Freeport server due to the high player-population. According to Wongwhey, things have improved a bit since the server upgrade, but she still has issues with crashing and lag as well as a pesky voice-chat bug. Minutes later, I experienced the issue first-hand as I locked up while zoning into a player's home and had to reboot.

As I took a tour of their guild hall, I bumped into Spisme, a 10-foot-tall Ogre who was actually a player from France. And that brought up a new issue I hadn't considered. The Freeport server is a virtual melting pot. Because there's only one server, everyone, regardless of timezone, has to play together. A quick perusal of the guild recruiting list shows a couple of European guilds, one that's Spanish-speaking, and one from Japan. The potential language barrier hasn't really affected gameplay for those in Crafting Critters, although Briarios mused that while he's sleeping, his guild is full of active players from across the pond (and further!). It's basically a 24/7 guild.

A view from the top

For the Crafting Critters, life on Freeport seems pretty good, but what about raiding guilds, particularly high-end, competitive raiding guilds? I tracked down two of the top guilds on the server, Empire and Black Flag, to see what they had to say. Both guilds are currently knee-deep in Velious content and have already taken down several bosses. First, I contacted Preciouskiss from the guild Empire. Her guild wasn't raiding that night, but she was about to lead a guild trivia contest, so I kept my questions to the point. I asked her about what types of payment ranks they had in their guild, and she said they carried all ranks and that the only requirement to join was to be at least level 30. She said that if there are bronze players who end up raiding with them, it's difficult but not impossible because they can purchase unlockers to allow them to equip raid gear. The only thing that might be tough for bronze, she said, is the plat limit. I then asked her about consumables, like the heal and power potions, and whether her guild required them. She said no and that while players are aware of them on the Marketplace, they generally raid with the same clickies that Legacy server raiding guilds use -- totems, player-crafted potions, and tinkered items. She said she had a few power potions on her character, but couldn't recall the last time she used them on a raid.

Next, I talked to Davix, leader of the guild Black Flag. He echoed the thoughts of Preciouskiss, saying that his guild doesn't require the use of Marketplace consumables on raids. He added that he felt SOE did a good job of not forcing players to use the cash shop, and that the items available didn't affect gameplay that much. I did press both Preciouskiss and him on whether they knew of any raiding guilds on the server that either required them or leaned heavily on them, and both said they weren't aware of any such guilds. As for the presence of so many "Bronze" players on the server, he said that it didn't detract from his gameplay, and in fact, it reminded him of when he was the new guy. I asked him if he knew what Marketplace items were most popular with his guildmates, his answer was experience potions to level alts, which is actually a common practice already on the legacy servers. Lastly, I asked him if he would be opposed to the notion of making all servers free-to-play, with a more limited and consistent inventory available on the Marketplace. He said yes, if it was done right. I pressed him on what he meant, and to my surprise, he said, lose the cash shop. Clearly, this is not a player who depends on the Marketplace for his game enjoyment.

Unfortunately, one area I wasn't able to explore was PvP, and battlegrounds in particular. I touched base with a guild leader of a guild that originally was on the Vox server, a PvP/Exchange server. He was busy in a group at the time, and I wasn't able to catch up with him again in time for this article. But while I didn't get his input, I have read several threads on the EQ2X forums bemoaning the lack of players who queue up for battlegrounds. Those who choose to join battleground instances can only play against others on the Freeport server; cross -server instances are not allowed here. As a result, the same small cluster of PvPers are forced to face each other night after night, often in lopsided matches with uneven numbers of teams. And as for open-world PvP, it doesn't exist at all on the Freeport server, unless you count dueling.

The guild leaders I spoke to gave me the sense that there's a solid, core community of players on the Freeport server. Each mentioned having good relationships with other guilds overall, even in the competitive raiding scene. They were all very accommodating, and their friendly replies to my random tells as a level 3 newb is proof of that. Overall, the more time I spend on the Freeport server, the less I fret about the bronze players and the cash shop, and the more I appreciate the vibrant community that exists here.

Thanks to Briarios, Wongwhey, Davix, and Preciouskiss (and their guilds!) for their time and input.

From the snow-capped mountains of New Halas to the mysterious waters of the Vasty Deep, Karen Bryan explores the lands of Norrath to share her tales of adventure. Armed with just a scimitar, a quill, and a dented iron stein, she reports on all the latest news from EverQuest II in her weekly column, The Tattered Notebook. You can send feedback or elven spirits to karen@massively.com.
In this article: crafting, eq-2, eq-ii, eq2, eq2x, eqii, EverQuest-2, everquest-2-extended, everquest-ii, everquest-ii-extended, featured, freeport, guilds, karen-bryan, marketplace, tattered-notebook
All products recommended by Engadget are selected by our editorial team, independent of our parent company. Some of our stories include affiliate links. If you buy something through one of these links, we may earn an affiliate commission.
Share
Tweet
Share