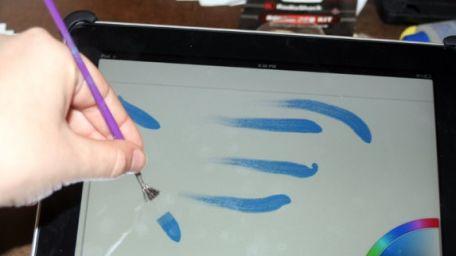 Artist Margarita Benitez really wanted a Nomad Brush for her iPad but didn't have the cash for the actual thing, so she did the next best: she made one herself. Using an old brush handle and some conductive thread, she was able to assemble a working brush, and says it works better than expected. Her entry at Instructables has all of the instructions if you want to give one a shot yourself.

I would say that if I tried one myself, I'd probably go with a different brush handle -- hers is a little thin for my tastes, though each artist probably has their own preference about what kind of brush you'd need (and it might just depend on the project as well). She also had to use a metal holder for the brush head and holds the brush with her fingers touching it, in order to send the capacitive charge down into the screen itself. I bet there's a way to improve on that, though, either by using a metal brush handle completely, or by running a strip of metal up and down the side of the brush.

Either way, Benitez' result looks great. If you do jump in and put one together, be sure to send pictures to us on the tipline so we can see yours in action!

In this article: art, brush, capacitive, conductive thread, ConductiveThread, diy, do it yourself, DoItYourself, iOS, ipad, make, Margarita Benitez, MargaritaBenitez
All products recommended by Engadget are selected by our editorial team, independent of our parent company. Some of our stories include affiliate links. If you buy something through one of these links, we may earn an affiliate commission.
Share
Tweet
Share