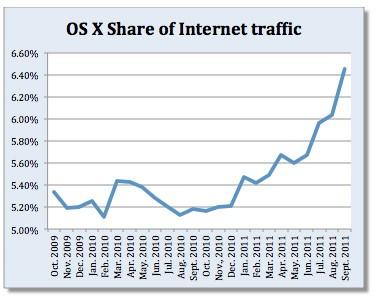 With all the attention on Apple iPads and iPhones, you might have missed reports that OS X is steadily increasing its share of web traffic, which means there are more and more Macs out there.

Net Applications reports a 25 percent increase in Apple global desktop share in Fiscal 2011. The firm thinks the bump may be because students and parents are getting ready for school, and notes that there was a similar jump in September 2010, but that increase was much smaller than what the research is showing now.

Net Applications puts OS X with a 13.7 percent share here in the US, and 6.45 percent worldwide. Those numbers are record highs for Apple.

This reports parallels similar research from Chitika which shows similar gains for Apple in September.

In this article: globalshare, Net Applications, NetApplications, OS X, OsX, share
All products recommended by Engadget are selected by our editorial team, independent of our parent company. Some of our stories include affiliate links. If you buy something through one of these links, we may earn an affiliate commission.
Share
Tweet
Share