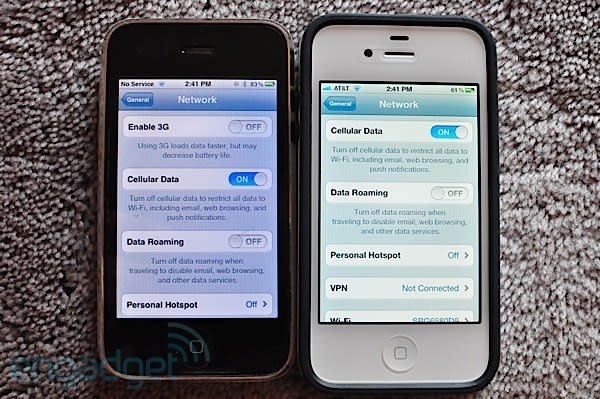 If you're among the teeming masses holding a brand new iPhone 4S in your hands, you may be surprised (as we were) to find there's something conspicuously absent from the Network Settings menu on your new device: specifically the ability to manually shut off 3G data. After receiving word, and a screenshot, from a helpful tipster, rocking a 4S on Vodafone's network, we found the same option missing from our own AT&T iteration. Of course this isn't the sort of thing that's likely to have an impact on most users, but if you're the type that likes to squeeze every last bit of juice out of that Apple, the omission could cause some frustration. We gave Apple support a call to see what they had to say, and were told AppleCare has no official response on the matter. If you're lamenting the loss of the 3G flip-switch sound off in the comments below.

Update: A few of our readers are reporting that the original Verizon iPhone 4 also lacked the 3G switch, which means the absence is most likely on a carrier-by-carrier basis.

[Thanks, Chris and Charlie]
In this article: 3g, apple, apple iphone, apple iphone 4s, AppleIphone, AppleIphone4s, enable 3g, Enable3g, iphone, iphone 4s, Iphone4s, mobilepostcross, network, network settings, NetworkSettings, setting
All products recommended by Engadget are selected by our editorial team, independent of our parent company. Some of our stories include affiliate links. If you buy something through one of these links, we may earn an affiliate commission.
Share
Tweet
Share