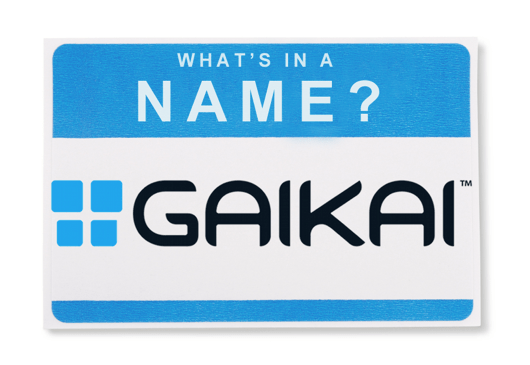 David Perry, Co-Founder and CEO of Gaikai, sat down with us during last week's Game Developers Conference: Online in Austin, TX. Over the howl of the expo floor's contemporary rock soundtrack, David let us in on Gaikai's mysterious branding:

"Basically one of our founders, his name is Rui Pereira, he came up with this name 'Gaikai,' and I said, 'Oh my God, no one will ever be able to pronounce that, no one will ever be able to spell that, this is a bad idea.' And of course, there's all the following conversations, what about all the other strange words that are out there: The Googles, and the Kodaks, and the, you know, the Xeroxes?

"There's all these strange things that are out there, so what's wrong with having a strange name? I then took a marketing class in Texas, and they explained the idea of 'mystique marketing;' it's actually cool to have a hard-to-say name, because it means if you know how to pronounce it, then you're in the club.

"So any time you hear Gaikai pronounced wrong, you can go 'Hrm, this guy doesn't know what it means, or how to say it even.' That's mystique marketing, so I thought, 'Huh, maybe we give this a try.'

"It turns that the actual word is a Japanese word, and it means 'a large open space,' like out on the open ocean, and if you look around on the open ocean, you can go in any direction. And that's what we believe cloud gaming enables."

Gaikai is a technology company that provides streaming game middleware to third-party corporations such as Walmart.

Like this feature? Be sure to check out the What's In A Name Archives.
In this article: dave-perry, david-perry, gaikai, game-developers-conference-online, GDC, GDC-Online-2011, GDCO, Rui-Pereira, whats-in-a-name
All products recommended by Engadget are selected by our editorial team, independent of our parent company. Some of our stories include affiliate links. If you buy something through one of these links, we may earn an affiliate commission.
Share
Tweet
Share