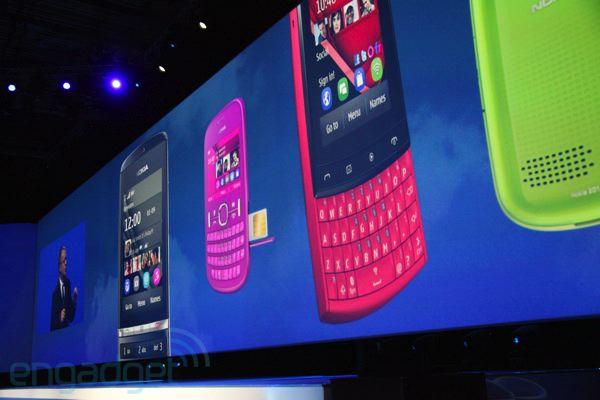 Nokia has unveiled the Asha lineup, a spate of lower-end devices that run Series 40 and blur the line between featurephone and smartphone. The devices -- named the 200, 201, 300 and 303, are all designed to encourage the "next billion" users to access the web, and seem directed toward emerging markets. The 200 includes an Easy Swap option that lets you throw in multiple SIM cards, and can offer up to 32GB of storage for media playback -- 52 hours of it, in fact. It, along with the 201, have exceptionally loud speakers that work great for parties and those crazy all-nighters, though the latter lacks the multi-SIM support. Both of these phones will be available for €60 ($85); the 200 is going to ship before the end of the year, while the 201 will be ready for your purchase by Q1 2012. The 300 and 303 are the touchscreen handsets of the bunch; the 300 is a candybar with a numeric keypad and offers a 1GHz CPU, 5MP camera and 3G. It'll be priced at €85 ($120) and will be available in Q4 2011. Similarly, the 303 offers the same types of features with a 2.6-inch display and full QWERTY experience, and should be ready before the end of the year for €115 (about $160).

All four Asha devices are made of polycarbonate and come with a Nokia Browser, which is powered by the cloud and compresses data by up to 90 percent, saving users from racking up excessive charges. Oh, and did we mention Angry Birds is coming to Series 40? Be sure to check out the vids for each Asha phone -- as well as the press release -- after the break.

Sharif Sakr and Dante Cesa contributed to this post.

Nokia continues its mission to deliver high quality, stylish devices that provide the best access to social networks, the Internet and information, and offer the best overall experience and value proposition for the next billion mobile phone users. These consumers want access to innovations such as easy-to-use dual-SIM, local services and content, and third-party apps, all with a superior user experience for which Nokia mobile phones are known.

The device harnesses a powerful 1Ghz engine, 3G and WLAN to deliver a fast Internet experience. Social networks, email and IM are at the center of the experience, easily accessible from the homescreen. The Nokia Asha 303 is powered by the cloud-based Nokia Browser, which by compressing the web by up to 90%, provides higher speeds and a more affordable access to the Internet.

Entertainment and applications are also a core part of the Nokia Asha 303 offering. Angry Birds Lite, the popular mobile game, comes preinstalled, together with support for other globally relevant applications such as Facebook Chat, Whatsapp messaging and the latest release of Nokia Maps for Series 40 (in selected markets). The price will vary from market to market and operator to operator. The estimated retail price for the Nokia Asha 303 will be approximately 115 EUR, excluding taxes and subsidies. It is expected to start shipping in the fourth quarter of 2011.

The beautifully designed Nokia Asha 300 is a touch device which also offers the convenience of a keypad. The Nokia Asha 300 has a powerful 1GHz processor and 3G to deliver a faster Internet and social networking experience. The Nokia Browser allows for fast, affordable and localized Internet access by compressing web pages by up to 90%.

Users have fast access to messaging, email and instant messaging from the home screen and can swipe to access apps, music or games from the Nokia Store. The Nokia Asha 300 also arrives preloaded with the popular Angry Birds game.

The Nokia Asha 300 comes with a 5 megapixel camera, a music player, FM radio, Bluetooth connectivity and can handle memory cards up to 32GB. The price will vary by market and operator. The estimated retail price for the Nokia Asha 300 will be approximately 85 EUR, excluding taxes and subsidies. It is expected to start shipping in the fourth quarter of 2011.

The Nokia Asha 200 is Nokia's latest dual SIM phone with Easy Swap functionality, allowing consumers to easily change their second SIM without switching the device off.

It is a fun and colorful QWERTY phone designed to meet the needs of young, urban consumers who want to constantly stay in touch. The Nokia Asha 200 features integrated social networking, email and IM, adding RenRen, Orkut and Flickr support. Nokia Asha 200 makes it possible to carry thousands of songs with support for 32 GB memory cards and providing a battery for an amazing 52-hour playback time. The price will vary by market and operator. The estimated retail price for the Nokia Asha 200 will be approximately 60 EUR, excluding taxes and subsidies. It is expected to start shipping in the fourth quarter of 2011.

The single SIM version of the Nokia Asha 200, the Nokia Asha 201 is ideal for young consumers who wish to stay socially connected, are price conscious and like listening to music. The Nokia Asha 201 has great music features including a high performing loudspeaker, enhanced stereo FM radio and ringtone tuning. With the Nokia Browser you get even faster, even better and more affordable access to the Internet. It supports up to 32 GB memory cards and provides a battery for 52 hours of music playback time. The Nokia Asha 201 also supports push email as well as the popular Whatsapp messaging app. The price will vary by market and operator. The estimated retail price for the Nokia Asha 201 will be approximately 60 EUR, excluding taxes and subsidies. It is expected to start shipping in the first quarter of 2012.
In this article: 303, asha, breaking news, BreakingNews, featurephone, mobilepostcross, nokia, nokia 200, nokia 201, nokia 300, nokia 303, nokia asha, nokia world 2011, Nokia200, Nokia201, Nokia300, Nokia303, NokiaAsha, NokiaWorld2011, qwerty, s40, series 40, Series40, video
All products recommended by Engadget are selected by our editorial team, independent of our parent company. Some of our stories include affiliate links. If you buy something through one of these links, we may earn an affiliate commission.