Sail to Tyrant's Throne with RIFT 3.1 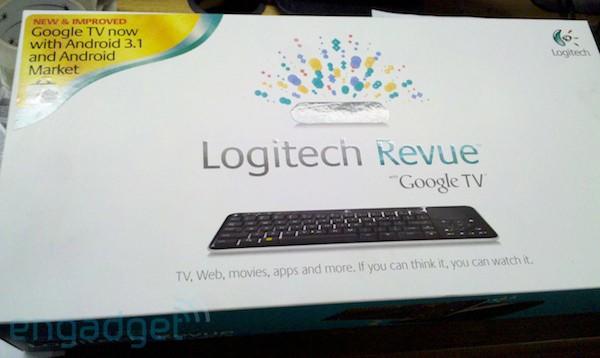 Well, well, what do we have here? These Logitech Revue boxes just hit the sales floor of a major electronics retailer, prominently sporting "New & Improved: Google TV with Android 3.1 and Android Market" stickers. Logitech also released its quarterly earnings overnight, claiming $7.9 million in sales from the Revue and accessories since dumping its CEO and slashing prices to $99. These haven't been cracked open yet to see if any Honeycomb leaks out, so it's possible they're just waiting for the long-delayed OTA update like all the others. Still, if you're trying to get a jump on the second major Google TV push without any hackery needed, it could be worth scouting store shelves in your area.

Update: As a few commenters have pointed out, a support rep on Logitech's forums indicates these boxes have been updated with a sticker only. You'll still have to wait Google to deliver the goods along with everyone else.

Update 2: Logitech reached out to us with the following statement:

We'd like to clarify that these products do not include the next version of Google TV software. The boxes were prematurely updated with the stickers in anticipation of the next release of the Google TV software, which, once available, will be a free and automatic update pushed to all Logitech Revue boxes that are installed and connected to the Internet.

[Thanks, DevonTheDude]
In this article: 3.1, android, android market, AndroidMarket, apps, exclusive, google, google tv, GoogleTv, hdpostcross, logitech, logitech revue, Logitech Revue with Google TV, LogitechRevue, LogitechRevueWithGoogleTv, revue
All products recommended by Engadget are selected by our editorial team, independent of our parent company. Some of our stories include affiliate links. If you buy something through one of these links, we may earn an affiliate commission.
Share
Tweet
Share