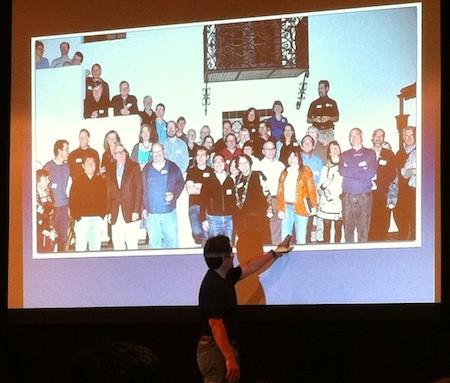 Guy Kawasaki was the keynote speaker for the first day of MacTech 2011. Instead of a talk about Enchantment or Bozosity, this talk took a different turn: It was about Steve Jobs.

Specifically, it was about what Guy had learned from Steve and from working for Steve. I really liked his talk since it was a bit more personal than some of the other presentations I've seen him give. It was fun to watch him walk across a photo of an Apple employee reunion and point out people and explain who they were. I really felt like I was getting a chance to sit and talk with Guy about Steve and Apple and his time there, not like I was sitting in a room full of people listening to him talk. I enjoy any chance I get to hear him speak, and he's good at it, so everybody wins, but it's nice to see something that was more personally about him.

One of the biggest things he learned was how to give a good presentation, and his slides reflected that. He pointed out that (like Steve) he uses a dark background which is easier on the eyes (and if you're a speaker who walks into the projector beam, your eyes are saved too), keeping the info on a slide as minimal as possible, and shared his own formula for determining the minimum font size in a presentation: Determine the age of the oldest person seeing the slides, and divide their age by two. That's your minimum font size.

I liked his specifics about Steve, too. He was discussing how a leader needs to know when it's time to make a change if the wrong path was chosen. He said, "Steve can say something and reverse himself later, and you'll think he was right twice."

A favorite of the Apple fanatical was the slide after that, which said "Real CEOs demo." (I know it was a favorite, it got applause.) His example was how Steve knew the products well enough to demo them, and he brought other people in to show off other pieces, but it was basically the Steve show and no other company does that even still.

Two things stuck with me as things I learned from Guy that he learned from Steve: First, design counts. (I already knew I was all over this, but it was reinforced during the talk.) It's important that something look good, and price does NOT equal value. Also, he put up a chart with two axis, "Unique" and "Value". He discussed the other three pieces and then made it to the last one and said, "What I learned from Steve is that history is made in the upper right corner."

This was a great way to kick off MacTech 2011, it was nice to start with some fun and a tribute to the person who is why we're all here in Los Angeles in the first place.

In this article: events, features, GuyKawasaki, MacTech, mactech11, mactech2011
All products recommended by Engadget are selected by our editorial team, independent of our parent company. Some of our stories include affiliate links. If you buy something through one of these links, we may earn an affiliate commission.
Share
Tweet
Share