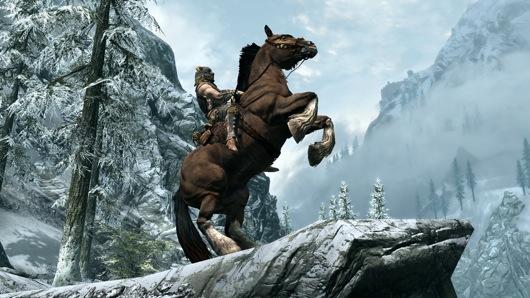 With the video game industry seemingly headed toward smaller, cheaper, more casual and less complex game experiences, it's somewhat of an anomaly to see Bethesda Game Studios continuing to hit the ball out of the park with games that are the exact opposite: long, expensive and incredibly dense. Starting with the 2002 release of The Elder Scrolls III: Morrowind, Bethesda has focused almost exclusively on lavish RPG experiences. Ten years later, Skyrim looks to continue that trend to a round decade and beyond.

I recently spoke with Bethesda VP of Marketing Pete Hines about what makes the developer's RPGs "bulletproof" against gaming's current "less is more" trend.

"We do what we do best," said Hines. "We make big, crazy RPGs, and fortunately for us the previous ones have done really well so there's no reason for us not to keep making them. If that's what we loved doing and nobody wanted to play them, we'd have a problem on our hands."


Luckily for Bethesda (and RPG fans), that's a problem it's avoided to date. Each entry in Bethesda's Elder Scrolls series has outperformed the previous, with Oblivion earning several "Game of the Year" nominations, a feat Bethesda's post-apocalyptic RPG, Fallout 3, repeated in 2008. But looking at the history of the legendary RPG company yields a few surprises and suggests that its decade-long trend hasn't exactly been an overnight occurrence.

For one thing, the first Elder Scrolls game was published almost a decade after the company was founded. For another, before making massive, life-pausing RPGs, Bethesda was a sports game company. It turns out that in addition to being hardcore fantasy nerds, Bethesda's staff loves sports. All sports. Following Hines on Twitter, for example, yields equal parts Bethesda updates and commentary on weekly sporting events, which may be a fair representation of the man himself.

I asked Hines what he thought the fan reaction might be if Bethesda's next game, instead of a Fallout or Elder Scrolls follow-up, was a sports title. "I think unless it was in and around what we already are known for, we'd get the 'Waah?' response," he said. He added, however, that he would love to see Bethesda Game Studios' Todd Howard develop a modern NCAA football title because both men love the sport.

I think the reason that, perhaps, others fail is that they simply haven't been doing it for as long as we have, the way we have.- Pete Hines

While other game studios may chase the hits and trends, continually watching what other companies are doing so that they can get in on the action, Bethesda has made its bones by being one of the companies that other companies watch, and not looking back. While many major game studios were flailing to find their footing in MMOs or casual games, respectively, Bethesda raked in millions by sticking to its guns and churning out RPGs for the hardcore masses. In 2006, Oblivion sold close to 2 million copies in less than a month, becoming the fastest-selling title on the then-new Xbox 360. Fallout 3, by conservative estimates, has sold nearly 5 million.

As for why BGS succeeds where so many other fail, Hines ventured a guess that it's due in large part to "time in": "We have a team of people who are singularly focused on doing a certain type of game really well," he said. "They came up with a tool system that allows them to do those kinds of games, they have a great game director in Todd Howard who knows when and where to make the big bets, and they have an enormous amount of talent. I think the reason that, perhaps, others fail is that they simply haven't been doing it for as long as we have, the way we have. You learn a lot from experience."

One of the things you learn from experience, for example, is how to keep gamers satisfied no matter what platform they're on. While Bethesda has experimented with temporary exclusivity, by and large, its core titles are available on all HD platforms and deliver approximately the same experience at the same level of quality, something even Bethesda-owned game development legend id Software struggles to accomplish.

"Good games are good games," said Hines, "so the core experience is the same on all platforms, and we try to do some things with the UI for PC folks to have the best experience possible. From a technical standpoint, yes, the PC is a headache. It just is. A million different possibilities of hardware, drivers, etc. As you saw with Rage, all it takes is some bad video card drivers and years of hard work comes off as 'buggy' when in fact it's a really solid, stable game."

Apart from driver issues and wildly unpredictable configuration possibilities, one of the biggest obstacles with developing for PCs right now is piracy. Having a great game people want to play may be a winning strategy on the consoles, but on the PC that just makes you more susceptible to having your game jacked and not making a dime from it. Hines acknowledges this is a problem Bethesda has also faced.

"Unless you decide not to make your games available for PC, it's a problem and you have to deal with it," he said. "So we do the best we can to protect it without resorting to Draconian measures, and we continue to enthusiastically support our PC fans with things like the Creation Kit and the ability to create and add unlimited amounts of mods and content to your existing PC game."

He also said that PC gamers will be "very pleased" with the performance of Skyrim. Pleased enough, one has to hope, that they'll be willing to pay for it at retail instead of downloading it from torrent sites.

I asked Hines what he thought about the current state of the industry, and whether or not he was worried about the momentum toward casual and social games. He replied that all Bethesda could do was focus on doing what they do the best way they can do it, which includes, in part, spotting talented developers who are doing other things - and then acquiring them.

Over the past few years, Bethesda and parent company Zenimax have been on a buying spree, adding to their lineup of wholly-owned development companies the legendary shooter developer id Software, as well as Arkane Studios (first-person adventure), Machine Games (action), Tango (survival horror) and Zenimax Online (MMOs), which, according to Hines, has allowed BSG to focus exclusively on the RPGs while expanding Bethesda's in-house areas of expertise. "All of those guys share some common ideals but in different types of games," he said. "So they're really complimentary."
Although he adds that even considering the recent acquisitions, he can't imagine Todd Howard and BGS doing "anything other than what they've been successful at to date." Which brings us to Skyrim.

The fifth numbered entry in the Elder Scrolls series, Skyrim is the product of years of development, a decade of experience in designing successful RPGs, two decades of overall game design experience and countless contributions from some of the most talented developers working on games. Hines said he and the team have high hopes for the game and that pre-orders so far have been "just fantastic." This Friday, we'll find out just how fantastic, but signs are pointing to another monster hit for Bethesda.

I asked Hines, in spite of the winning track record on the current core platforms, if Bethesda had any planes for a Facebook or iPad Elder Scrolls game. "Don't hold your breath," he said.

Super Bowl pick? "Hard to go against the Packers repeating. They just look so good on both sides of the ball. Even though my Panthers aren't winning, I take solace in the fact that at least they're entertaining to watch now with Cam Newton."

Russ Pitts is the former editor-in-chief of The Escapist and the former producer of TechTV's The Screen Savers. He is currently writing freelance and blogging at False Gravity. Follow him on Twitter.
In this article: Bethesda-Game-Studios, Bethesda-Softworks, microsoft, pc, pete-hines, playstation, ps3, skyrim, the-elder-scrolls-v-skyrim, xbox
All products recommended by Engadget are selected by our editorial team, independent of our parent company. Some of our stories include affiliate links. If you buy something through one of these links, we may earn an affiliate commission.
Share
Tweet
Share