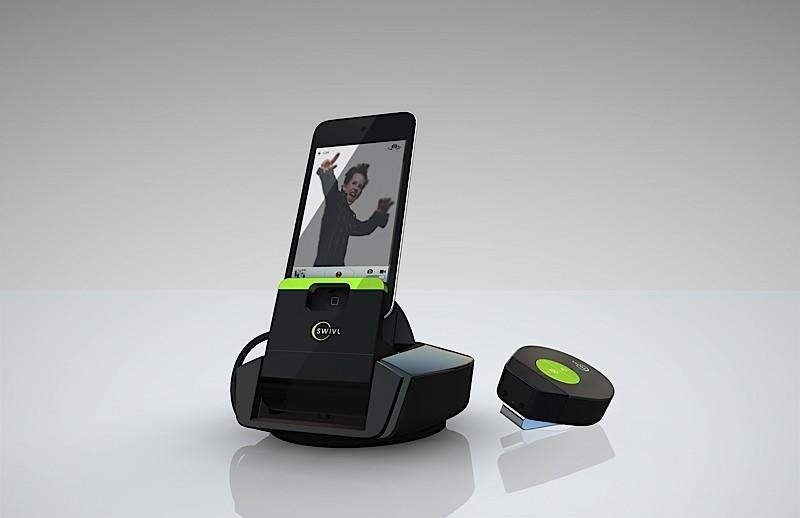 If you'll recall, back in January we took notice of an interesting gizmo dubbed Satarii Star -- a movement-tracking dock concept that was seeking funding on IndieGoGo. Well, the unit has since been funded and today the company is re-introducing it as the Swivl. Aside from the updated moniker, it's also sporting an updated feature set and a revamped look. The unit can still house gadgets from iPhones and Androids to pocket camcorders, but improves on the Satarii by adding vertical tilt functionality on top of its 180 degrees of horizontal movement. (Update: We're told that the Swivl can also rotate a full 360 degrees.) Notably, it's stated as being able to "move faster than you can" -- if you're worried about staying in the shot, that is. As it currently stands, we're only seeing renders of this little guy, but the company expects to have fully functional units at CES this January, with units shipping to North America in "early 2012" for about $160. Hopefully we'll get to see the Swivl do its thing on the show floor, but for now, interested parties can reserve their very own at the source link below. You'll find the full press release just past the break.

Update: You'll find a video of a pre-production Swivl in action after the break as well.

We now have a name and look that will stand out. Let us introduce Swivl.

It has only been eight months since our IndieGoGo campaign ("http://www.indiegogo.com/Mobile-Video-Accessory") ended, and we began building a unique and useful new mobile video product. We wanted a device that lets you record yourself by following you wherever, and however you move. Today we are proud to introduce Swivl. Our community (you guys!) helped us decide on a new product name and great URL – that's the hard part, trust us. We also had great support from UD+M and Studio Backs ("http://www.uberdm.com and www.studiobacks.com") in creating an incredible new brand and industrial design. New name, new look and a shiny new website at www.swivl.com where you can reserve your Swivl right now.

The Swivl gives you a hands free, sleek, in pocket design that lets you track and record your actions with your iPhone, iPod Touch, Android phone, GoPro, or Flip. Swivl follows you horizontally and vertically (yes, we have added tilt!!) to keep you within the image frame at all times. It can move faster than you can, at least we're building it that way. This is our online debut but you'll be able to see a working prototype this January at the 2012 Consumer Electronics Show.

Our vision has always been to deliver a compelling experience through Swivl's unique user interface, amazing (and smart) design, and by listening to our most important influencers, the users. We heard all of your wants and concerns when it comes to mobile video in your lives, and we listened.

We expect to ship Swivl in early 2012 at an estimated $159.99, and we encourage you to Reserve Yours Now
www.swivl.com/reserve this ensures you'll be one of the first to receive Swivl at launch.

Here's to a new era of mobile video!
In this article: camcorder, camera, dock, indiegogo, motion tracking, motion tracking camera dock, MotionTracking, MotionTrackingCameraDock, satarii star, SatariiStar, swivl
All products recommended by Engadget are selected by our editorial team, independent of our parent company. Some of our stories include affiliate links. If you buy something through one of these links, we may earn an affiliate commission.
Share
Tweet
Share