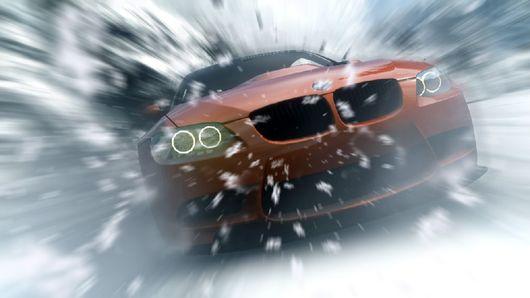 Need for Speed: The Run has a prologue level of sorts that establishes protagonist Jack's situation – a guy in trouble with the wrong people, looking for a way out. He finds it in a cross-country race with a purse of 25 million dollars. But where The Run really begins is in a warehouse garage off the Embarcadero in San Francisco. You pick a car and roar out onto the street, greeted by the light of an early morning in the city. It's not exact, by any means, but developer Black Box nails the feel of San Francisco's streets well. And then crazy sh*t starts happening all around you, in the best way possible, as more police cars than I think San Francisco actually has are chasing you and dozens of other cars toward the Golden Gate bridge, and...

It makes an impression. Need for Speed: The Run starts out so well that I coasted on that high for about 45 more minutes before I realized the game I was playing just wasn't very good.

It takes that long to realize it because the fundamentals work pretty well. Cars in Need for Speed: The Run are fun to drive. They handle well, they sound good (some awful audio compression aside), and they feel fast. That last part is good, because The Run wants you to drive fast. Really, really fast. Faster than you probably should.

That speed is where the trouble starts. I know that The Run wants fast. I can tell because the competition is always ahead of you, going about 150 miles an hour. If you want to catch up, you'll need to drive like, well... an asshole. You will need to drive like an asshole. I had to cut corners sharply, pull bootlegger turns, and ricochet off of other cars most races to stand a chance. All of this seems at odds with The Run's level design.

Unfortunately, the sound underpinnings of Need For Speed: The Run are undermined by an onslaught of strange design decisions that effectively murder most of its fun. The Driver Level aspect is first up. You don't start with the ability to boost, you need to unlock it. I can almost wrap my head around that, since nitrous oxide is an aftermarket thing. But at Driver Level 7 in Need for Speed: The Run, you unlock the greatest perk any driver could ever ask for: the laws of physics. You are incapable of drafting other cars until level 7. Meanwhile, you'll be slingshoting competition around you from the second race forward.

That competition doesn't even feel like drivers, they feel like slot cars, running what seem to be the exact same path every time you attempt a race. I say attempt here because you will wreck in The Run. Often. And that will introduce you to what is probably the most under-cooked "rewind" feature in a racing game since the feature became the norm.

Rewind in The Run isn't what you think it is – it's not a rewind at all. Instead, you're greeted with a black screen with a big "Rewind" image on it, and after anywhere from five to twenty seconds(!), you'll be set back anywhere from one to two miles in the race. It's checkpointing, and bad checkpointing at that.

There's also a strange, demonstrated paranoia surrounding leaving the road. If you get more than six feet or so away from the track, the screen will go dark and The Run will invoke a rewind. Sometimes it's even more stringent. The Run demands risky driving to finish races, but is all too ready to punish a player for it. Instead of introducing a new way to succeed and compete, rewinds just get in the way of playing the game.

The races themselves don't help. The level design in The Run is usually boring, and frequently nonsensical. One scene toward the end of the game has you fleeing a subway train at 140 miles an hour or more, and there is literally no way to outrun it. Police cars are again able to violate the laws of physics at will, pulling in front of you and screeching from 160MPH to a dead stop in just about no seconds flat. Still, the instant-kill setpiece or environmental hazard will become a bigger enemy than any car on the road. And when The Run isn't trying to kill you directly, it's tugging your pants around your ankles by killing the framerate with an explosion, which trips up the controls.

As for that story, there's just not much there. I didn't mind the quicktime events. They function, and they were a good palette cleanser from the frustration of the rest of The Run. But the characters are never developed, and the story exists solely as a way to contrive some truly idiotic racing situations.

Need for Speed: The Run has more to it than The Run itself, with some fairly standard multiplayer and a Challenge mode. Multiplayer is more bumper-cars. It ditches the rewind feature of The Run for Hot Pursuit style respawns. It makes for a faster and less frustrating experience, but the same underwhelming course design doesn't make things particularly interesting. The challenge races share almost all of the same issues as The Run proper.

And issues are what The Run has more of than anything. Need for Speed: The Run's biggest problem is how much it has in common with a real drive from one end of the US to the other. There are a few bright spots here and there, but it's mostly full of unexpected stops, lots of flat tires, and too many assholes on the road. This isn't the worst Need for Speed, but it can't place against other, better racers from the last year.

This review is based on debug "review" code provided by EA. EA spokespeople have stressed that load times in the retail release of Need for Speed: The Run will be improved by as much as 20 percent.

Joystiq's review scores are based on a scale of whether the game in question is worth your time -- a five-star being a definitive "yes," and a one-star being a definitive "no." Read here for more information on our ratings guidelines.
In this article: microsoft, need-for-speed-the-run, pc, playstation, ps3, xbox
All products recommended by Engadget are selected by our editorial team, independent of our parent company. Some of our stories include affiliate links. If you buy something through one of these links, we may earn an affiliate commission.
Share
Tweet
Share