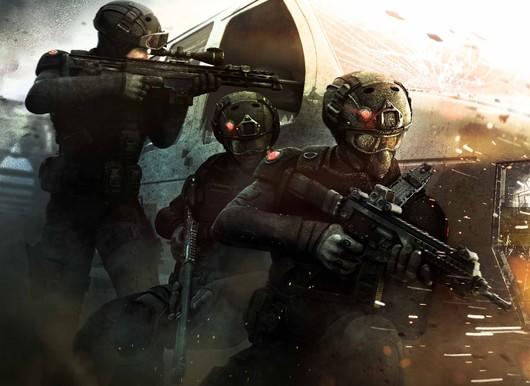 As I'm sitting down in Ubisoft's San Francisco office for a two hour presentation on the recently announced Rainbow 6: Patriots, there's one thought running through my mind before it even starts:

What the hell is Ubisoft thinking?

It's been almost four years since we've seen Rainbow Six. After 2008's Rainbow Six: Vegas 2, the series went darker than dark. The only mention of the franchise that thrust Tom Clancy's name into the gaming lexicon in 1998 has been veiled and in passing in other Clancy-universe games like Endwar and HAWX 2.

Then a couple of weeks ago, concept footage of Rainbow 6: Patriots was unveiled, and apparently, what happened in Vegas is staying there (including spelling out "Six" in the title). The new face of Rainbow 6 is something ... different. It's dirtier. It's less certain.

Rainbow 6: Patriots seems aimed at eliminating easy answers. Gone are the easy, foreign-ish targets of Rainbow Six past. Instead, Ubisoft has tipped headfirst into ultranationalist, home-grown American terror. In the inspiration reel of news footage that prefaced a more detailed explanation of Patriot's background, footage of Timothy McVeigh's handiwork at the Alfred P. Murrah federal building in 1995 loomed large, mixed in with imagery of 9/11. If this sounds unsettling, then maybe you'd better metaphorically sit down.

The Rainbow Six games have always dealt with collateral damage – namely, the prospect of civilian deaths – but where previously the death of a hostage would often be a failure condition, Rainbow 6: Patriots instead focuses on the consequences of that eventuality. Put simply, civilians are going to die and, occasionally, you just might be the one that kills them. The story sees a terrorist group that call themselves the True Patriots attempting to overthrow the US government, but rather than mounting a direct offensive, they've gone guerilla. The Patriots are also conscripting recruits, if you could call them that, kidnapping civilians and forcing them into the role of suicide bombers.

All of this left me feeling deeply uneasy. It's a sensitive, precarious time for American political movements, with Occupy Wall Street and its regional offshoots on one side protesting corporate greed and unchecked influence, and the Tea Party on the other, bristling at government power, often with gun in hand and the rhetoric of violent upheaval. It's difficult to reference current events without seeming exploitative, and I can't help but wonder if Rainbow 6: Patriots is falling on the wrong side of that line. Perhaps that's hypocritical, given how often shooters traipse through the gardens of other cultures' political unrest and how little it's ever discussed. But here, it's impossible for me to ignore.

There's not much point in giving the play by play of the demo I saw. The only real surprise was that Ubisoft played it for us, rather than showing us the previously released concept video. Rainbow 6: Patriots does exist beyond concept footage and target renders. It's not really fair to comment on how Patriots looks so far from release, other than to say it doesn't look bad, really. It just looks markedly different than the Unreal Engine 3-powered Rainbow Six: Vegas, which makes sense – Patriots is using a new iteration of Ubisoft's Anvil engine, tech better known as the backbone of the Assassin's Creed series. This adds a different quality to the way Rainbow moves and interacts with its environment.

There are spins on the Rainbow Six conventions we've grown to expect. For example, your squad can be ordered to breach doors, though this time around, Ubisoft aims to take some of the micro-management out of the process. Friendly AI is being developed to intelligently ascertain entry tactics based on the situation at hand. While the snake-cam from Vegas is also gone, it's been replaced by a new thermal imaging device that largely serves the same purpose.

Ubisoft also clearly plans on bringing Rainbow 6: Patriots to the multiplayer conversation again, though Patriots is still too early in its marketing to offer much in the way of details. The new addition on display last week was the sandtable, a multiplayer planning environment of sorts that allows teammates to plot routes of attack and other strategies before they'll invariably fall apart in the heat of the moment, as those things tend to do.

But it's difficult to consider these new additions amidst the subject matter that Ubisoft is guiding the series toward. I don't think there's much that games must avoid with regards to content, but games usually just aren't very good at dealing with difficult moral gray areas. Why that is involves a different conversation, but what I've seen of Rainbow 6: Patriots hasn't reassured me that Red Storm, Ubisoft Montreal, and Ubisoft Toronto have it all figured out yet.

The new Rainbow has me feeling hesitant, uneasy in a way that games don't often evoke in me. I suppose that Ubisoft should be lauded for their willingness to risk so much, to go so far out on a limb with one of its most successful franchises. But it seems an awful lot like the narrative equivalent of betting against the house.

Rainbow 6: Patriots is planned for a 2013 release, for undisclosed platforms.
In this article: microsoft, pc, playstation, ps3, rainbow-6-patriots, rainbow-six, Red-Storm, tom-clancy, ubisoft, Ubisoft-Montreal, ubisoft-toronto, xbox
All products recommended by Engadget are selected by our editorial team, independent of our parent company. Some of our stories include affiliate links. If you buy something through one of these links, we may earn an affiliate commission.
Share
Tweet
Share