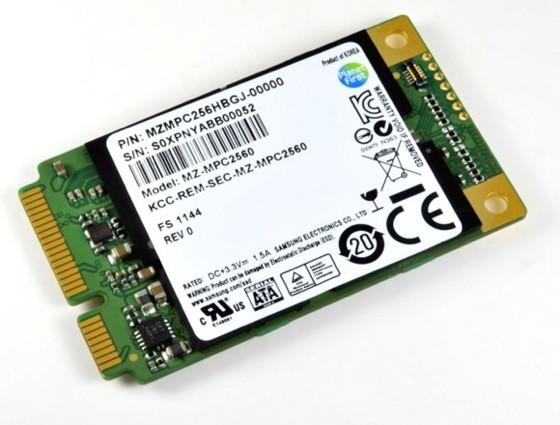 The newest member of Samsung's 6Gb/s PM830 family of SSDs is designed to sit inside the Ultrabooks of 2012, which means it's had go through some slimming down. The mSATA drive uses 20 nanometer NAND for face-melting speed, but is crammed into a 50.95 x 30 x 3.8mm package, weighing only eight grams. The drive will comfortably read 500MB/s and write 260MB/s on a clear day, six times faster than a comparable HDD. It'll allow Windows to boot in under ten seconds and transfer "five DVD files" (roughly 45GB) in around a minute. The drives also come with 256-bit AES for those moments when your Ultrabook gets stolen, or more likely, floats away in the wind. 64GB, 128GB and 256GB variants will roll out to OEMs shortly but we expect a consumer version to be announced shortly for everyone with some courage and a screwdriver.
Show full PR text
Samsung Announces High-Performance mSATA SSDs for Ultra-Slim Notebook PCs

Combining Samsung's new high-performance mSATA SSDs with the latest multi-core processors will help PC manufacturers to substantially improve performance of their Ultrabook-class portable PCs up to that of notebook PCs, in meeting ever-increasing consumer needs.

The new SSDs will be part of the highly popular Samsung PM830 product family that was introduced earlier this year. They make use of Samsung's advanced 20 nanometer class** NAND flash memory components which incorporate the toggle DDR interface.

Utilizing high-performance SATA 6Gb/s controllers based on Samsung's own technology, the new mSATA SSDs can operate at the industry's highest sequential read and write speeds of 500 megabytes per second (MB/s) and of 260MB/s respectively, under optimum conditions. This is, more than six times the speed of hard disk drives typically offering a data transfer rate of 80MB/s. The Samsung SSDs also enable faster system boot-ups (in the 10-second range) and will transmit five DVD files in about a minute.

In addition, the Samsung mSATA SSDs feature an advanced hardware-based security solution including 256-bit Advanced Encryption Standard (AES) protection, which will prevent unauthorized access to data on a lost or stolen notebook PC.

Beginning this year, the market for Ultrabook-class mobile PCs has been growing rapidly and is expected to expand beyond that of tablet PCs as early as next year due to outstanding performance characteristics, more advanced processors and use of the Windows 8 operating system. According to market research firm IHS iSuppli, the Ultrabook share of global notebook shipments will exceed 40 percent in 2015.