Workaround puts auto-playlist back on Zune 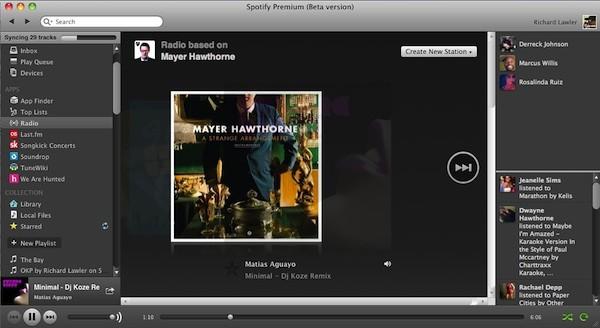 While Spotify has had little trouble cranking up its subscriber base so far, one feature that has notably been lacking is its radio / auto playlist feature. Today (tied in with an appearance by CEO Daniel Ek at LeWeb 2011) that's been upgraded, as the freshest preview builds move the Radio section down among the new Spotify Apps, where it now lets you drop in any song from your library for it to automatically create a radio station of similar music around. Subscribers not interested in upgrading yet can find similar functionality tied to Spotify's library with the EchoFi tool, but this venture represents the service's debut of an "all-new intelligent recommendation engine" meant to dig the tracks you want out of its millions-deep library. Advertising "unlimited skips" is a clear jab at Pandora, but it's not immediately clear if you'll still need a premium paid-up account for truly unlimited listening (well, maybe not). Hit the source link to grab a Radio-enabled preview build and see if some algorithm can defeat even the mightiest Yacht Rock playlist crafted by our own Brian Heater.
In this article: auto playlist, AutoPlaylist, music, pandora, radio, spotify, spotify apps, spotify radio, SpotifyApps, SpotifyRadio
All products recommended by Engadget are selected by our editorial team, independent of our parent company. Some of our stories include affiliate links. If you buy something through one of these links, we may earn an affiliate commission.
Share
Tweet
Share