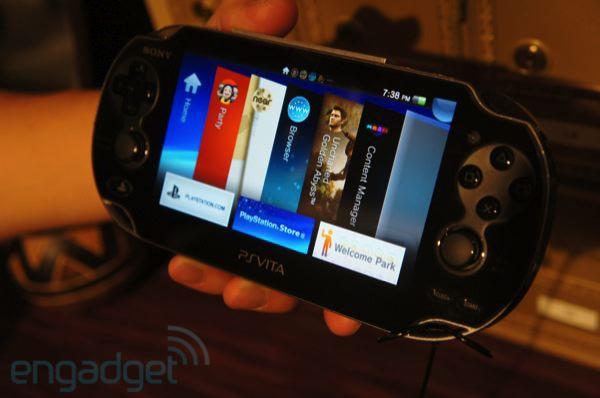 We've handled the PlayStation Vita often enough to know our way around its lightweight chassis and petite thumbsticks, but whenever we've tried to explore the handheld's underlying user interface, event staff played interference. Developers at a recent Vita Hill Social Club event were much less shy, however, and let us poke and swipe through the Vita's menu with hardly a shrug.


The Vita's menu navigates exactly as you'd imagine it might -- like a smartphone. The rig's 5-inch touchscreen provided plenty of real estate for the requisite swiping navigation, serving up a crisp view of the system's lightly animated menu. Apps and menu items line the home screen in alternating rows of three and four icons per line, allowing ten icons per screen. Additional icons spill over to a secondary, southbound screen, placing primary application management on a vertical scroll.

Tapping on any of the home screen's bubbly icons will pull up a flat app page, offering users a "start" button that can be used to launch the associated application. The new page also takes its place in a queue of running programs, which can be cycled through by swiping horizontally. Icons for the open apps crowd the screen's headlining status bar, offering a tiny preview of their order in the line-up. At first this seemed like a small, inadequate look at running applications, but we soon found that holding the PlayStation button brought up a more comprehensive cascade of tabbed items, naming each application explicitly. A simple diagonal swipe closes applications with an animated flourish that peels the offending app off of the Vita's screen.

Like any good touch interface, the Vita UI is simple, intuitive and attractive. We mastered the basics of the Vita almost immediately, flicking our way through the system's menus like old pros. Navigating between screens is snappy and smooth, with stimulating animations that give the mundane task of content management a smidge of satisfying flair. It's fast too -- not only did the UI fail to stutter at our hasty swipes and screen jumps, but halted games resumed almost instantaneously.

We were only able to spend a few minutes with the Vita's user interface, but what we saw impressed. The UI makes full use of the system's touchscreen, building an XMB-free interface that plays on our familiarity with smartphones, yet still manages to feel fresh. Event staff warned us that what we were seeing still wasn't final, but considering that the Vita is hitting Japanese retailers in less than a week, we'd wager it isn't far off. Good thing it feels fairly solid, then. We're looking forward to putting the Vita's OS -- and the handheld itself -- through its paces when it heads our way next year. Until then? Peek at our tiny gallery above, and use your imagination.
In this article: gaming, hands-on, playstation, playstation vita, PlaystationVita, sony playstation, sony playstation vita, SonyPlaystation, SonyPlaystationVita, touchscreen, UI, user interface, UserInterface, video games, VideoGames, Vita Hill Social Club, VitaHillSocialClub
All products recommended by Engadget are selected by our editorial team, independent of our parent company. Some of our stories include affiliate links. If you buy something through one of these links, we may earn an affiliate commission.
Share
Tweet
Share