The NX200 is Samsung's latest entrant into the interchangeable lens (ILC) category -- it's a mirrorless model, to be more precise, and a fairly impressive one at that -- at least when you glance at the spec sheet. It's the company's latest ILC to use an APS-C size sensor, which is the largest we've seen in a mirrorless cam. This sensor type implies that the NX200 may have a chance at competing with Sony's NEX-C3, which has been our top pick in the category, and its 20.3 megapixel rating suggests that Samsung wants to be taken seriously here, with a true contender on its hands. But has Samsung delivered a winner? Jump past the break for our take.%Gallery-141618%
Samsung
0
SCORE
Engadget
N/A
Critics - Not yet scored
N/A
Users - Not yet scored
N/A 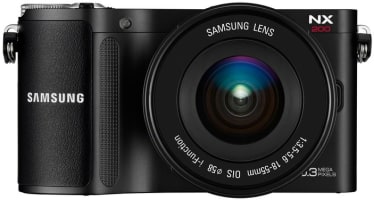 The established commitment to high-quality images may bring return customers, but it doesn't sell cameras like an attractive design. And the NX200 has the looks it needs to drive sales -- it'd be tough to argue that this is an unattractive cam. The sleek black housing is curvaceous and smooth, but doesn't come without a few quirks. The most peculiar design element is the NX lens mount, which extends beyond the front face by roughly half an inch, and is level with the front of the rather generous camera grip. In an age where sleek and flush designs have become the gold standard, including a mount that juts out this far from the body is a rather bold move.

The camera is comfortable to hold, with a textured patch just below where you'd rest your fingers and a curved design that feels natural in hand. There's a large Samsung logo positioned in the center of the grip -- it's covered completely when you're holding the camera, so there's no need to worry about eager Samsung fans approaching you on the street with a bevy of questions about your purchase. There's also a standard lens release button up front, along with a green focus lamp -- there's no built-in flash here, though a compact external strobe is included in the box.

Flipping to the back of the camera, you'll find a 3-inch AMOLED VGA display -- perhaps our favorite component on the NX200. In playback, images look fantastic, with accurate color and sharp details, though white balance in preview occasionally differs from what you'll see in instant playback after capturing an image. While the sensor is ultimately the most important component in any camera, the display clearly plays a critical role in verifying exposure and sharpness, and we really have few complaints here. To the right of the screen, there's a dedicated record control for activating 1080p video capture, along with exposure compensation, menu, function, playback and delete buttons. There's also a selection wheel, and a four-position button with dedicated options for display, speed, ISO and AF modes, along with an OK button in the center.

Up top are stereo microphones, a small speaker grill and a full-size hot shoe that's slightly recessed in order to maintain a near-flush top casing (we would have liked to see Samsung employ a similar design with the lens mount). At the far right is a mode dial, with direct access to manual, automatic and scene modes, a combination power slider/shutter release, and a wheel for zooming into images during playback. Flipping open a solid plastic cover on the right side reveals mini-HDMI and micro-USB ports, while the bottom of the camera includes a tripod connector, and a single compartment housing both the 1030 mAh battery and SD card.

The included 18-55mm optically stabilized kit lens has a maximum aperture of f/3.5-5.6, and a rather large 58mm filter size. It's a standard manual zoom/focus rig, but with a twist -- a customizable function button just above the AF/MF switch provides direct access to aperture, exposure compensation, ISO and white balance settings. It won't have a significant impact on your workflow, but it's a welcome feature nonetheless.


Sadly, focus is one critical area where the NX200 doesn't shine. The camera will eventually bring your subject into focus, most often with perfect accuracy, but it can be sluggish at times -- naturally in low light, but it was even slow in bright sunlight, where cameras like the Olympus E-P3 excelled. Pre-focusing helps to solve the issue, minimizing shutter lag, but if you have just a fraction of a second to capture your subject, you're likely to miss the action. The camera can also refocus automatically while capturing video, but there's a noticeable delay, followed by a sluggish readjustment. Suffice to say, it's far from ideal.

The camera can power on, focus and fire its first shot in about 1.5 seconds, but in reality, the delay can be several seconds longer when you're trying to focus on subjects in deep, multi-layered scenes, even in bright sunlight. We took the NX200 for many shoots around a handful of different environments on three continents, and had significant issues getting the camera to focus at times. It would still fire either way, but the on-screen focus confirmation indicator that normally glows green when a subject is sharp would appear red, and the image would be noticeably soft.

Beyond this focus issue, the camera did perform quite well, with a speedy seven-frames-per-second burst mode (at full resolution for up to 11 shots in JPEG or eight in RAW). The 1030mAh battery's life was also phenomenal -- even after shooting 700 images and 25 minutes of 720p video over four days, the indicator still displayed three (out of three) bars, though it's difficult to tell how that remaining power would translate to actual shooting time. Considering the Pentax Q only let us capture 230 photos and five minutes of video before going caput, we have no complaints here.

One of the greatest benefits of using an APS-C sensor is excellent low-light performance, and we were pleased to see that the NX200 does a fine job shooting at high-ISO settings. Noise is barely visible at ISO 800, and non-existent at ISO 200. Looking beyond noise, image quality was on par with other cameras in this category, including the Sony NEX-C3. Colors and exposure were generally spot-on, but when viewed at 100-percent, some details often appeared soft, even on images where a focus lock was confirmed by the camera.

We only had one lens to try out, so it's difficult to determine whether or not low-quality optics were to blame, but considering most users are likely to use this camera (and any other entry-level ILC) with the kit lens, it's important to evaluate the NX200 as a set. Still, sharpness was where we would expect it to be for a camera in this price range with JPEG compression -- no APS-C camera will be able to match a higher-end full-frame camera with pricey optics, like the Canon 5D Mark II, but the NX200's images will look great on the web (as you can see in the gallery below), or in smaller prints.%Gallery-141633%


We're quite pleased with the NX200's interface. The dedicated mode dial up top lets you choose between program, aperture-priority, shutter-priority and manual. Another mode allows you to move control to the on-lens function button, with direct access to a variety of shooting modes, ranging from Backlight to Halftone Dots (though some of these are better left to Photoshop). You can adjust your selection using either the lens-mounted focus ring or the on-camera zoom wheel.

Next up is Samsung's "Magic" mode, which doesn't actually work any magic, per se, but instead offers a variety of filters and frames -- it's not quite clear how the deceptive title came into play. There's also panorama, Scene (which includes the same offering as the lens control mode we outlined above) and Movie modes (though you can use the record button to start filming from most other modes as well), along with Smart Auto, which lets the camera choose the shooting mode automatically based on your subject.

The main system menu is refreshingly simple and intuitive, with settings divided into nine tabbed pages -- you shouldn't have to dig much to make any adjustments. The accessible settings vary based on your current mode, so you only see options for adjustments that are currently available. Three camera pages include options like photo size and Smart Range (HDR), a single page of movie options, two pages of custom options, three pages of general settings and some basic GPS adjustments. Hovering over a setting brings up a vague description, so you'll need to refer to the manual for more detail.


The mirrorless ILC category is still in its infancy -- we're just about three years in at this point -- but several manufacturers have managed to develop excellent cameras, for every (mid-range) budget. As these compact interchangeable lens cameras become more affordable, and add features that meet, or occasionally go beyond what's available with full-size SLRs, there's much more of an incentive for photographers to look towards mirrorless cams to meet their needs. Nikon took an unexpected approach with its grossly-underpowered (but potentially very profitable) 1 System, and Canon has yet to announce any release at all, but there's no question that mirrorless cams are here to stay, and that we'll see additional offerings in the months and years to come.

We're still standing behind the Sony NEX-C3 as the best value in this category. It can't shoot 1080p video and doesn't offer a 20.3 megapixel sensor like the NX200, but with the Sony, $550 buys you an excellent 16.2 megapixel APS-C ILC with an 18-55mm kit lens, and we have absolutely no complaints at all regarding performance. At $900 (kit package price), the Samsung NX200 is frankly a very tough sell. NX-series early adopters looking to upgrade from the NX10 or NX100 may consider this year's model to be an obvious choice, but if you haven't already made in an investment in Samsung glass, we don't see a compelling reason to start just yet.


Focusing issues aside, we were generally quite pleased with the NX200. Samsung's latest ILC offers great image quality and performance, with only a few issues. That doesn't mean we'll be making room in our camera bag, though. Sure, it offers 1080p video capture and 20.3 megapixel stills, but unless you need those features, a $900 price tag is simply not competitive enough once you consider Sony's basic mirrorless offering can be had for $549 -- a roughly 30 percent difference in price. In a world where the NEX-C3 didn't exist, we'd be much more excited about taking the plunge with Samsung, but until South Korea's darling delivers a true contender at a more affordable price point, we recommend looking elsewhere.
All products recommended by Engadget are selected by our editorial team, independent of our parent company. Some of our stories include affiliate links. If you buy something through one of these links, we may earn an affiliate commission.