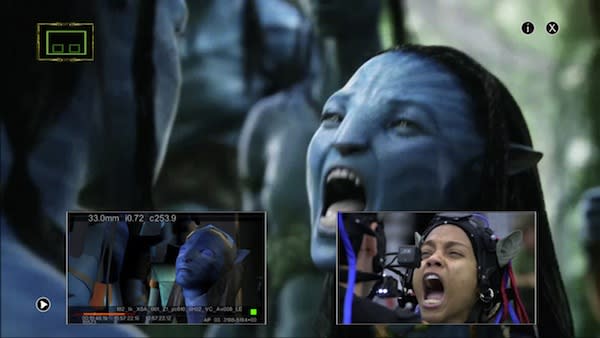 If you've made the switch to watching movies delivered via the internet instead of disc, one of the things that you'll usually give up is interactive special features, but Fox is turning that trend around with its latest repackaging of Avatar. The iTunes Extras Special Edition of the movie goes on sale Tuesday and includes "Green Screen X-Ray" features letting viewers deconstruct the extensive special effects during 17 scenes as they watch, as well as an original screenplay from director James Cameron, his scriptment, and a gallery of 1,700 images. You can get an idea of how the X-ray feature works from the images here and a trailer (included after the break), but at $20 for an HD copy, we figure it will be just the most dedicated fans taking a trip back to Pandora before the 3D Blu-ray is freed from exclusivity next year.

New Interactive Features Take Fans Deeper into Pandora than Ever Before

Fans can experience the global box office sensation like never before as they control scene deconstructions in simultaneous views. This new feature will also enable consumers to interact with the performance capture and visual effects levels in 17 of the film's scenes. For the first time ever, Green Screen X-ray gives users an interactive look through the visual effects levels to see the original green screen footage behind a pivotal scene.

"AVATAR iTunes Extras Special Edition" also features an original screenplay by James Cameron, Cameron's scriptment (a novella with some scenes broken out into dialogue), a gallery of 1,700 images and more.

AVATAR, the Oscar and Golden Globe winning epic, is the highest-grossing film of all time, generating nearly $2.8 billion in worldwide box office. AVATAR is also the top-selling Blu-ray disc of all time.

In this article: apple, avatar, fox, green screen, GreenScreen, hdpostmini, itunes, itunes extras, ItunesExtras, james cameron, JamesCameron, special features, SpecialFeatures, video, x-ray
All products recommended by Engadget are selected by our editorial team, independent of our parent company. Some of our stories include affiliate links. If you buy something through one of these links, we may earn an affiliate commission.
Share
Tweet
Share