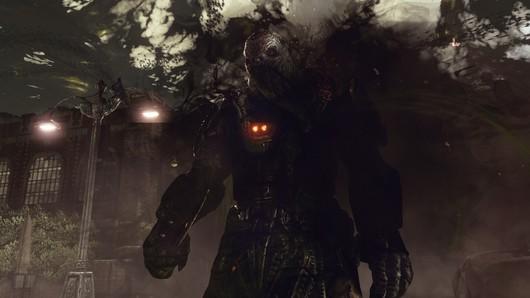 Gears of War 3 warranted some pretty enthusiastic adjective usage: "polished," "well-paced," "fantastic," even. I'd go so far as to call it the most refined, well-put-together shooter of 2011. So when the first piece of add-on campaign DLC, RAAM's Shadow, was announced, I was excited for it. More Gears 3, but set before the first game? It sounded great.


It's frustrating, because RAAM's Shadow is predicated on good ideas that should get even the passing fan of the Gears of War games interested. Set just after Emergence Day, RAAM's Shadow sees the final moments of Ilima city prior to a Kryll storm. Starring a combination of previously seen characters from Gears and Gears 2 and one entirely new squadmate, your objective starts with evacuation and deteriorates from there.

But that doesn't cover the "Shadow" part of the title, of course, as Gears of War 3's first piece of campaign DLC includes a pair of interludes allowing players to assume control of Gears of War (the first) heavy General RAAM as he leads Locust forces and summons Seeders to poison the sky and destroy the city.

So, yes. RAAM's Shadow is, uh, geared toward fiction nerds for the series. It's a chance to see the doomed Lt. Kim in action again, and shines new light on Tai, the ill-fated but under-developed friend to Marcus and Dom in Gears 2. It's a chance to understand just why RAAM's was such a terrifying presence in the original game, and also develops the complicated relationship the COG and Gears have with the civilians of Sera a little more. In these regards, RAAM's Shadow is successful-ish. The story and content are there, but the execution is somewhat lacking.

Not as lacking as everything else though. Playing through RAAM's Shadow I was occasionally shocked that it released at all. If Gears of War 3 was all polish throughout, its impossible to walk too far in RAAM's Shadow without bumping your shins on rough edges. Even the most basic things that the series has gotten right from the beginning are fumbled. Emergence holes make a return, but somehow, RAAM's Shadow is still full of moments where you can see Locust magically pop into existence when you walk into an area. Other times, they might be present but frozen like statues until you cross a magical line, taking them from dead puppets into real boys.

That isn't as distracting as watching a Locust Grenadier run into a wall and stare at it until you blast him into bloody pieces, or seeing a Wretch more or less run in circles. The smooth transitions from cutscenes and setpieces to combat arenas and vice versa are also gone. RAAM's Shadow stumbles from section to section in a haze of stuttering fade-ins and outs as jarring loading screens pop up unexpectedly.

But all of this is somewhat superficial. Part of Gears of War 3's charm was its seamless experience, but it's the encounter design and gunplay that made it so exceptional. RAAM's Shadow largely fails here as well, which is the biggest surprise. Firefights feel disjointed and poorly planned, and more than once, I watched them derail into a literal brawl between my teammates and the Locust forces. The sense of build-up and release present in the main game is largely absent. Instead, things just, sort of, happen. There's only one really great extended sequence about two thirds of the way through in a sort of parking structure which calls to mind some of the better moments of Gears of War 3, but it can't redeem a few hours of middling combat. Meanwhile, the RAAM sections are insultingly underdeveloped, devolving into "walk over there," "point your finger at things," and then some more "point your finger at things." It's just not very fun after the initial novelty crumbles.

For Gears nerds looking for a closer look at some of the fiction outside of the games, RAAM's Shadow is relatively interesting. But as a major piece of campaign content, it trips over itself at every possible opportunity, making it hard to recommend. Here's hoping the rest of the Season Pass can make up the difference.

This review is based on the Xbox Live Marketplace release, using a redemption code provided by Microsoft. Gears of War 3: RAAM's Shadow is currently available on the Xbox 360 for 1200 MSP ($15 USD), and is also the second piece of content included in the Gears of War 3 Season Pass.

Note: Joystiq does not provide star ratings for downloadable content reviews with the understanding that the quality of the core game's experience is unchanged from the retail release to DLC add-ons; see:Gears of War 3 review.

In this article: epic, Gears-of-War-3, microsoft, raams-shadow
All products recommended by Engadget are selected by our editorial team, independent of our parent company. Some of our stories include affiliate links. If you buy something through one of these links, we may earn an affiliate commission.
Share
Tweet
Share