IronMonkey and Firemint merging into Firemonkeys, jungles burn across the world 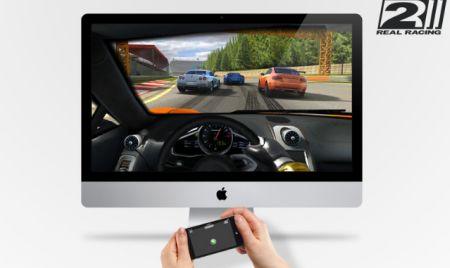 Firemint and EA have launched Real Racing on the Mac App Store just in time for Christmas. And not only does the game offer up the same high definition racing fun of the popular iOS series, but there's another twist as well: You can use an iPhone or iPad to control the game on your Mac. That's pretty cool -- I presume that means you need a Real Racing app to do it, but there are a few free versions out, and the full versions are only a buck during the holidays anyway. Other than that, the Mac app doesn't sound too new, though there are still licensed cars, lots of tracks to play through a career mode, and of course you can use the power of your full Mac rather than just an iOS device. The Mac App Store version is $12.99 right now.

And elsewhere in the world of controlling things and the Mac App Store, a company called Drone Apps has released a Mac app called Drone Station, that will let you control your Parrot AR.Drone quadricopter directly from your Mac instead of an iOS device. The software looks pretty barebones, but it has quite a few options, including the ability to get all of the incoming video from the drone, as well as control it directly with any number of game controllers you can hook up directly to the Mac. It's actually very impressive, and if you happen to have a Parrot AR.Drone (or find one under the tree this holiday), the app seems worth a try. It's on the Mac App Store for $9.99.

Parrot has told us that it will be at CES again this year, and we look forward to seeing what other news they've got for the AR.Drone and its Apple-created interfaces.

In this article: firemint, iOS, iPad, iPhone, mac app store, MacAppStore, parrot ar drone, ParrotArDrone, real racing, RealRacing
All products recommended by Engadget are selected by our editorial team, independent of our parent company. Some of our stories include affiliate links. If you buy something through one of these links, we may earn an affiliate commission.
Share
Tweet
Share