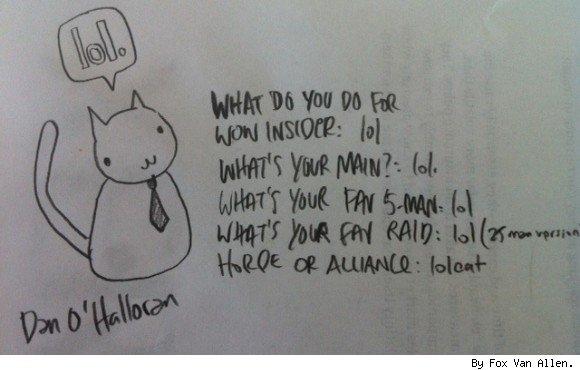 @Druidis4fite The AH Fee structure is a regressive tax on the poor. #OccupyGregStreet
@Warcraft This movement doesn't seem to have a clear message. -- CM Lylirra

As with all BlizzCon-related months, October was jam-packed and probably the busiest month of 2011 for the site.

However, this bit of news belongs in a special category all its own: Hello and Goodbye. Dan O'Halloran, our fearless editor-in-chief and a mysterious figure who communicated largely through a series of lolcats, left to head up Tecca, and Alex Ziebart took the reins. Goodbye, farewell, and amen, Dan. By the way, the image you see above is Fox's response to Dan's email earlier this year about restarting the About the Bloggers series.

Today in WoW: Steve Jobs has died Whatever you thought of him, Jobs helped revolutionize personal technology and consumer design, and his death sent a wave of introspection through those of us in the geek, tech and gaming subcultures. She said, typing on her MacBook Pro.

Blizzard introduces tradeable "Guardian Cub" companion pet purchasable through the Blizzard store Over the past few months, we'd been talking a lot about problems with gold sellers and inflation. It remains to be seen just what effect the Guardian Cub (or future pets and mounts like it) has on any of this. Although, as Blizzard later observed, it's not like the WoW Trading Card Game loot cards are all that different. You'll see a Gold Capped editorial below on the issue, but McCurley also tackled it for Lawbringer.

Metzen talks user-created content at GDC panel This actually reminded me of an article Basil wrote a year ago -- the case for open orders on the Auction House. While Metzen makes a pretty good case that user-created content just isn't a good fit for the polish Blizzard likes to see in WoW, I've always wondered whether Basil's suggestion might fit somewhat better.

Deathwing attacked Stormwind on the PTR And boy, did he ever. I've sometimes wondered if this type of city chaos would be a lot of fun on the live realms, though admittedly it's easy to say that when the inconvenience doesn't presently exist.

World of Warcraft: Mists of Pandaria announced So that name Blizzard trademarked earlier? Turns out it was the expansion! And the trailer hit right after, to no end of controversy as players argued about pandaren, pet battling, scenarios, and more.

BlizzCon round-up: Day one and day two Too tired, distractable or lazy to scroll through the dozens of BlizzCon posts we ran? They're all collected here.

Breakfast Topic: What game mechanic should be dumped? We heard from an awful lot of people about this one, and it spawned a great comment thread with people arguing the various suggestions' merit.

The Cataclysm: A critical examination "If your standard for discussion of WoW as a whole or any of its expansions considers the game a failure because there are aspects that some players don't like or the designers decide can be improved upon, then you are arguing that a game that has lasted since 2004 with millions of subscribers worldwide was a failure."

Mists of Pandaria: The myth of talent tree choice Fox can see what Blizzard's trying to do with the new MoP talent trees, but he's not sure that players can't figure out a way to wrest a "good" and "bad" choice from a system that's expressly designed to frustrate this tendency.

Ready Check: How legendaries destroy PvE This is a sobering look at an issue that's guaranteed to keep rearing its ugly head. Legendaries are fun and cool and exciting, but they're not great if your overriding concern is game balance.

Gold Capped: Legally buy gold with the Guardian Cub Player furor over legal gold selling spurred Basil to address the issue. And, as he points out, the ultimate solution to gold selling, hacking, and botting is to make the behavior unprofitable, not drive yourself crazy trying to stop it.

Officers' Quarters: Formal invitations Attendance issues are the bane of casual raiding when players take a similarly casual approach to the schedule.

There are no simple solutions: Design diversity in WoW MMO-Champion had published statistics showing that a mere 1.35% of players had completed the normal version of Firelands. Blizzard disagreed. Rossi looked at their responses and the arguments in the relevant forum thread and said, in essence, that maybe it's time to cut the developers some slack for trying to design content that's equally appealing to hardcore-wipe-all-night raiders and people who dip their toes in just for fun.

WoW Moviewatch: Class stereotypes I lost it at "GKICK."

Around Azeroth: It's lovely out in the woods today but safer to stay at home My, what a large axe you have, Grandma.

WoW Moviewatch: Largest crit in the world A team of players conspired to produce what may legitimately be the largest player critical strike in the history of the game. But don't worry, folks: It involves Warsong Gulch, a metric ton of player buffs and debuffs, and what we delicately term "clever use of game mechanics."

Around Azeroth: World of Minecraft I can't say I understand the desire to be kind of playing WoW even when you're not playing WoW, but to each his own.

WoW Moviewatch: Still subscribed "Look at us still talking/When there's nerfing to do/Better cross your fingers/And just hope it's not you/There are coffee breaks to take/And some PvE to break/For all the people who are/Still subscribed." GLADOS would be proud.

Around Azeroth: It's today that's the day of the plunge Elizabeth Wachowski was married on the day this went live. Her first and most beloved character, a female troll rogue, got herself a wedding dress in honor of the occasion.

WoW Moviewatch: PvP by Ken Ashcorp The winner of the BlizzCon 2011 song contest and a guaranteed earworm.

World of WarCrafts: The stunning cosplay of Christina Sims Her female monk from last year's BlizzCon costume contest still blows my mind. Seriously, if someone's reached the point of hand tooling leather, just give them the win.

The Light and How to Swing It: The AoE heal we deserve Holy paladins had received a significant buff to their AoE healing capacity on the patch 4.3 PTR, and Chase was trying to work out how the new Holy Radiance was going to fit into existing healing strategy. Problem is, it kind of didn't.

Insights and observations on early monk DPS mechanics Josh had had the opportunity to play around with the monk at BlizzCon, generally liked what he saw, and then started to wonder how the monk's mechanics would fit into the existing game.

The Light and How to Swing It: How to evaluate your tanking with World of Logs and Keybinding to streamline your tanking This is really something that could (and should) be copied and pasted for all tank classes, and I briefly considered doing a version for Shifting before realizing I'd just be repeating what Matt had said.

The Care and Feeding of Warriors: Wild speculation and the BlizzCon effect Rossi wound up having to rewrite his warrior column on the Saturday of BlizzCon, not because his predictions had wound up being wrong, but because they'd largely been accurate and thus weren't news.

Raid Rx: Thoughts on the next expansion and healers As we all thought, Blizzard's dissatisfaction with the Cataclysm healing model is going to result in a lot of big changes ahead. Matt pokes into the possible results.

The Care and Feeding of Warriors: Specializations in Mists of Pandaria Rossi was a little more optimistic than Fox was on how the new talent system was going revolutionize play.

Phat Loot Friday: Westfall Chicken As commenters observed, lost to the annals of WoW history is how the hell anyone figured out this quest existed in the first place.

WoW Insider's BlizzCon 2011 predictions I'm still struck by how accurate fan sites can get even if Blizzard successfully clamps down on leaks. While we certainly didn't get everything right, it wasn't too hard to guess what the developers had been thinking about as Cataclysm advanced.

World of Wardrobe: Serpentshrine, Tempest Keep, Hyjal, and Black Temple We recently learned that Burning Crusade weapons and gear are apparently the most popular for transmogrification. Here's how to get most of it.

Drama Mamas: A guide to when and how to leave your guild As Robin observed, this one column could realistically answer about 50% of the letters that the Drama Mamas get.

The Queue: Name that companion pet Josh had a lot of fun writing his first Queue on the Saturday of BlizzCon, helping clear up a few issues related to our coverage of the con, how predictions had panned out, and what a pandaren will become when it uses the Orb of Deception.

Drama Mamas: Transgender bullying Seraphina Brennan, the senior editor at our sister site Massively, popped in to help us handle a tricky issue that didn't seem to have a lot of good options. As she observes, games are supposed to be fun, and when you're not having fun in your current environment, it's probably time to change your environment.

WoW Insider's BlizzCon 2011 bingo It wasn't too long before we started marking stuff off our cards.

Breakfast Topic: Blizzard's "Horde bias" -- fact or delusion? Possibly the most controversial Breakfast Topic of the year and still a subject guaranteed to get people fired up with the mere whisper of the word Theramore.

Everything is Ghostcrawler's fault with #OccupyGregStreet This originated with a joke at BlizzCon and kinda exploded from there.