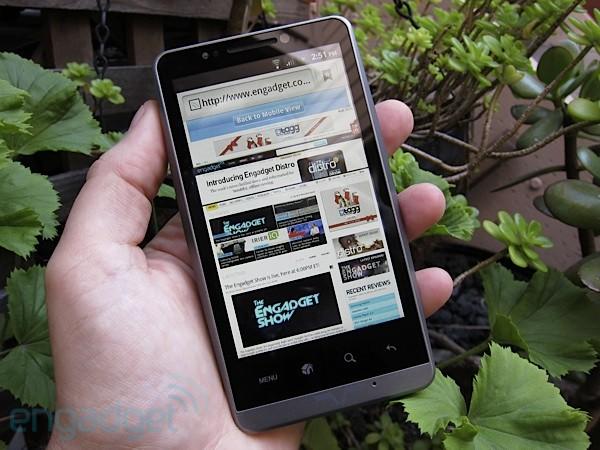 Yes, the Verzo Kinzo is real! That Americano-Czech Android smartphone with mid-range specs that went on sale in November with a ludicrous $459 price tag only to be hastily relaunched earlier this month for a slightly more digestible $359 is not a giant farce. (Well, maybe it is.) It left the ethereal world of rendered computer graphics and landed in our mitts just in time for the holidays. To be specific, we received the pricier $384 Verzo Kinzo Plus GPS package, which includes a voucher for Sygic's off-line navigation app and a gaudy, Star Trek-inspired car holder. After spending a few days with the handset we are able to report that it isn't particularly impressive in this day and age but isn't completely horrible either -- not to mention the faux-Vertu packaging and branding which are rather, well... unique. So why not grab some leftover eggnog, and join us after the break for our unboxing and impressions? 
It matters not if your device is mediocre when the packaging is fancy -- that's clearly the takeaway here, with a massive box containing layer upon layer of foam, translucent plastics and other refinements. Once you're done peeling everything away you're left with the Kinzo smartphone, a leather case, a manual, the aforementioned Sygic voucher, V-MODA-like earbuds, a micro-USB cable, Li-Ion battery, Euro-spec USB AC adapter, Verzo-branded microSD adapter with case and a snazzy stainless-steel USB car charger. Strangely, the North American USB AC adapter and carholder ship separately in a generic package.

After you've recovered from all the unboxing drama, you're basically presented with a bulky device that's a cross between the EVO 4G and the Nexus One. Just like the box it came in, the Verzo Kinzo is massive -- at 131.62 x 72.36 x 12.30mm (5.18 x 2.84 x 0.48 inches) and 155g (0.34 pounds), it makes even the Galaxy Nexus look small. Most of this heft comes from the slab-like design and a bezel that's wider than a 10-lane freeway in LA. The handset isn't really that heavy, but its shape isn't particularly hand-friendly, especially since the sides are wider in the middle and taper towards the ends. Angles and lines are everywhere, with motifs reminiscent of diamond facets. It's almost elegant.

Other than the 4.3-inch WVGA glass-capacitive touchscreen, most of the smartphone is made of molded plastics with noticeable flash lines and gate marks, and is finished using a two-tone gunmetal-colored paint scheme. Despite the sea of cheap materials, build quality is decent and the Kinzo feels solid (it's manufactured in Taiwan). In front you'll find the earpiece, sensors and a VGA front-facing camera, plus the usual four capacitive buttons (menu, home, search, back) and a mic. The back features a 5 megapixel AF camera and flash, along with Verzo's and designer Novague's logos. A micro-USB connector and speaker live on the bottom edge, and the power/lock key is at the top. The left side is home to the 3.5mm headphone jack and a volume rocker, with nothing on the right.

The battery door conceals slots for a standard SIM and for microSD storage, plus the aforementioned 1,530mAh battery. A Verzo-branded 8GB card comes pre-installed. Spec-wise, the Kinzo's guts are last year's glory with a 1GHz Texas Instruments OMAP 3630 CPU, PowerVR SGX 530 GPU, 512MB of RAM, unlocked tri-band HSPA (2100/1900/850MHz) and quadband EDGE radios, plus WiFi b/g, Bluetooth 2.1+EDR, AGPS and the usual bevvy of sensors (light, proximity, accelerometer, compass). Everything works as expected -- call quality and network performance are perfectly adequate on AT&T. While we didn't put the battery through our usual array of tests, we didn't have much trouble using the handset for an entire day. The 4.3-inch 800x480 TFT display provides reasonably good contrast and surprisingly nice viewing angles but turns into a mirror at the first hint of direct sunlight.


We took the camera for a spin and while the 5 megapixel AF module appears capable enough the software is a mess. Pictures snapped with the Kinzo are systematically overexposed, washing out colors, although dropping the EV to -2.0 usually improves things. Even our better images lacked detail, and while not terrible, low-light performance only matches last year's crop of mid-range cameraphones. The flash is also rather weak. But our biggest complaint is with the continuous autofocus, which is slow and inaccurate. While Verzo chose to use the default Android camera app, it removed the feature wherein tapping the on-screen shutter key initiates autofocus, holding it locks focus (allowing to reframe) and releasing it actually takes the shot. Video recording is a complete disaster, resulting in systematically corrupt MP4 files. While it supports up to 720p, it only captures 12fps using a 4:3 aspect ratio and extremely low-fi AMR audio, regardless of the resolution setting.

On the software front, it's back to the future with a mildly customized version of Android 2.2. Yes, FroYo. In late 2011. Weep now. The skin is subtle, with changes to the layout of the dock at the bottom of each homescreen, and cosmetic tweaks to the app tray. You'll also find that some menus, like the settings, have been rearranged slightly and while the number of homescreens can be adjusted between three and seven, the dock can't be edited. Beyond the standard set of pre-installed Google apps, the handset includes a bespoke date / time / weather widget and a file manager. Strangely, the TellMe app demoed in our video was removed from the Kinzo during a factory reset, and we've been unable to locate it in the Market or on Verzo's website. This app provides a way for users to communicate with the manufacturer directly by suggesting and voting on improvements to the device.

Sygic's offline navigation app doesn't really offer much more than Google's free navigation app -- other than the ability to work offline off course, which is a significant feature. We only learned after making our video that Sygic doesn't support streaming maps over the network at all, requiring instead that the data be downloaded and installed ahead of time using a separate app (Sygic Downloader, duh). Once we sorted this out, using the app was a rather unpolished experience, with some UI elements missing localized strings and displaying such informative text as "menu.main.settings" and "button.quit". Performance-wise, the Verzo Kinzo generally feels responsive enough, but with a Quadrant score of about 1,250 it's nothing to write home about. We occasionally ran into some issues with touchscreen sensitivity, but this looks like it's software-related.

Ultimately, we can't recommend the Kinzo. It's too little too late, especially in a world where a new Xiaomi Phone costs less ($310), and spending a little more buys you a new Meizu MX ($398), both unlocked dual-core handsets running Gingerbread -- not to mention that worthy devices like the Nexus S and Galaxy S II are readily available on the used market. We can only hope Verzo further drops the price to $259, improves the materials, fixes the camera and updates the OS. No matter what, please spare us the over-the-top packaging and branding next time. We're just not hip enough.
In this article: 1GHz, 4.3-inch, 5 megapixel, 5Megapixel, android, Android 2.2, Android2.2, exclusive, FroYo, Google, hands-on, HSPA, impressions, Kinzo, mobilepostcross, navigation, Novague, offline, OMAP 3630, Omap3630, release, Sygic, TellMe, unboxing, Verzo, Verzo Kinzo, VerzoKinzo, video, WVGA
All products recommended by Engadget are selected by our editorial team, independent of our parent company. Some of our stories include affiliate links. If you buy something through one of these links, we may earn an affiliate commission.
Share
Tweet
Share