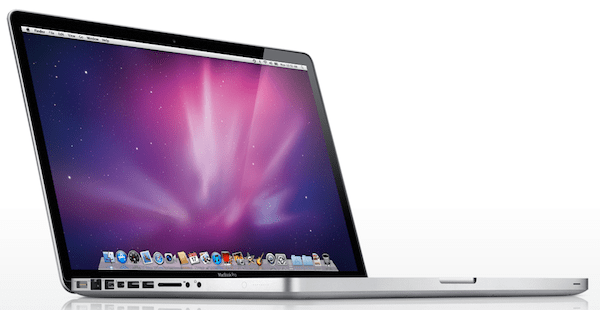 Come on, you knew this was coming! Oh yes, Apple's pulling the curtain off its new MacBook Pro family, and compared to the last refresh cycle, there are a serious amount of updates. Just as we had heard, all three will be getting new Intel Sandy Bridge Core i5 and i7 processors, AMD Radeon HD 6000M graphics (bye bye, NVIDIA!), FaceTime HD cameras, and some super fast Thunderbolt I/O transfer speeds. There are two new 13-inchers, two 15.4-inch versions, and one lone 17-inch model. How much will they cost you and what are the exact specs? You'll want to hit the jump for all of that and the official press release.


Aesthetically, the new Macbook Pro models don't seem to be have been altered all that much -- they're still the aluminum unibody machines we know and love. However, there is the addition of the new Thunderbolt connector, which promises up to 10Gbps data transfer speeds, and yes, it's based on Intel's long awaited Light Peak technology. We've got some more details on Thunderbolt here. The other major physical update to all the machines is the new FaceTime HD camera -- it's triple the resolution of the previous iSight MacBook Pro cams and supports full HD video calling.

All the new MacBook Pro models are up for order on Apple's store today, although at the moment the Store still appears to be down. Stay tuned for some hands-on impressions and eventually a full review!

Update: And the Store seems to be up! To order or not to order? That is the question.

Update 2: We've got the closer look at Thunderbolt you've been waiting for! Also check out our hands-on post / pictures.

"The new MacBook Pro brings next generation dual and quad Core processors, high performance graphics, Thunderbolt technology and FaceTime HD to the great design loved by our pro customers," said Philip Schiller, Apple's senior vice president of Worldwide Product Marketing. "Thunderbolt is a revolutionary new I/O technology that delivers an amazing 10 gigabits per second and can support every important I/O standard which is ideal for the new MacBook Pro."

MacBook Pro is the first computer on the market to include the groundbreaking Thunderbolt I/O technology. Developed by Intel with collaboration from Apple, Thunderbolt enables expandability never before possible on a notebook computer. Featuring two bi-directional channels with transfer speeds up to an amazing 10Gbps each, Thunderbolt delivers PCI Express directly to external high performance peripherals such as RAID arrays, and can support FireWire and USB consumer devices and Gigabit Ethernet networks via adapters. Thunderbolt also supports DisplayPort for high resolution displays and works with existing adapters for HDMI, DVI and VGA displays. Freely available for implementation on systems, cables and devices, Thunderbolt technology is expected to be widely adopted as a new standard for high performance I/O.

As the industry's greenest notebook lineup, every Mac notebook achieves EPEAT Gold status and meets Energy Star 5.0 requirements, setting the standard for environmentally friendly notebook design.*** Each unibody enclosure is made of highly recyclable aluminum and comes standard with energy efficient LED-backlit displays that are mercury-free and made with arsenic-free glass. Mac notebooks contain no brominated flame retardants, are PVC-free and are constructed with recyclable materials.

***EPEAT is an independent organization that helps customers compare the environmental performance of notebooks and desktops. Products meeting all of the 23 required criteria and at least 75 percent of the optional criteria are recognized as EPEAT Gold products. The EPEAT program was conceived by the US EPA and is based on IEEE 1680 standard for Environmental Assessment of Personal Computer Products. For more information visit www.epeat.net.

Apple designs Macs, the best personal computers in the world, along with OS X, iLife, iWork, and professional software. Apple leads the digital music revolution with its iPods and iTunes online store. Apple is reinventing the mobile phone with its revolutionary iPhone and App Store, and has recently introduced its magical iPad which is defining the future of mobile media and computing devices.
Source: Apple
In this article: amd, AMD Radeon, AMD Radeon 6000M, AMD Radeon HD 6000M, AmdRadeon, AmdRadeon6000m, AmdRadeonHd6000m, Apple, apple macbook pro, AppleMacbookPro, breaking news, Intel Sandy Bridge, IntelSandyBridge, laptop, light peak, LightPeak, macbook, macbook pro, macbook pro 13, MacBook Pro 15, MacBook Pro 17, MacbookPro, MacbookPro13, MacbookPro15, MacbookPro17, Sandy Bridge, SandyBridge, thunderbolt
All products recommended by Engadget are selected by our editorial team, independent of our parent company. Some of our stories include affiliate links. If you buy something through one of these links, we may earn an affiliate commission.